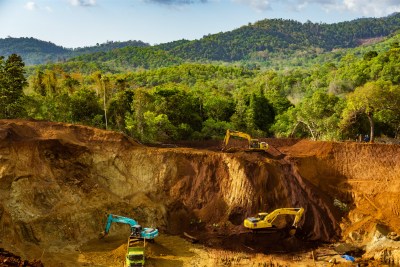 Indonesian Minister of Investment Bahlil Lahadalia suggested that Indonesia is looking into forming an OPEC-style cartel for nickel and other inputs used in battery production.

Nickel is becoming a hot commodity as it is a key input in the manufacture of lithium-ion batteries needed for electric vehicles (EVs) — and Indonesia has the world’s largest nickel ore deposits.

Given that demand for EVs is expected to balloon in the coming years, countries rich in natural resources are exploring the most expeditious ways to capitalize on the situation.

The idea for an OPEC-style cartel reflects the Indonesian authorities’ desire to leverage its control over a scarce and highly sought-after commodity. They seek a more favorable position on the global technological frontier.

Indonesian officials are discontent with the relatively low-value activities of extracting and exporting raw commodities. They want more of the value added during processing and manufacturing. Such value has historically been captured outside of Indonesia.

This was the logic behind a series of recent nickel ore export bans — a strategy that catalyzed billions of dollars of investment in Indonesia’s downstream nickel processing industry.

With mining and smelting activities increasingly localized, several leading global technology companies have made sizable commitments to invest in battery and EV production in Indonesia. At least in the near term, the decision to deprive global markets of unprocessed nickel ore achieved its objective of accelerating investment in higher value-added economic activities.

Talk is turning towards building on that success by scaling it up to the level of an OPEC-style cartel. This will allow Indonesia to exercise a greater degree of control over supply and price and maximize economic benefits. It is early days and seems more like a trial balloon than anything, so there are reasons to approach such an idea with caution.

One reason the nickel export bans are working is that they are limited in scope and have a narrow, clearly-defined objective — more downstream investment in Indonesian nickel smelters will lead to more investment in battery and EV production.

A global cartel of nickel-producing countries would be much more complex, difficult to organize and could be undercut at any time by a single member or simply by the vagaries of the market.

Not every nickel-producing country is going to have — or be able to achieve — the same objective. This could easily make any such undertaking unwieldy. Canada, a major nickel producer, has already indicated that it would be very unlikely to participate in any such scheme.

Another potential deterrent is that intentionally restricting supply to drive up prices incentivizes actors to invest in developing alternative technologies. It would be a big gamble for Indonesia to assume that batteries will always be dependent on nickel.

If the price is too high and supply chains become excessively politicized, companies will start looking to develop batteries without nickel — a process that is already underway. An OPEC-style cartel risks accelerating this process while alienating trade and investment partners in the process.

The downside of alienating partners for short-term economic gain is also worth considering. Though Indonesia has nickel, it cannot manufacture batteries or EVs without the technology and know-how from mature industry players like China’s CATL, South Korea’s LG Group or Japanese automakers.

Indonesia needs their assistance to move up the value chain as much as they need Indonesia’s nickel.

Resource-rich emerging markets like Indonesia have a long history of exploitation by more mature economies, particularly in extractive industries. Indonesia is asserting itself in a more muscular form of economic nationalism as a response, at least in part, to these historical imbalances.

This was evident in the blanket export bans on palm oil and coal in early 2022, as high global prices threatened domestic shortages. It is also evident in the way that Indonesia brushed off a World Trade Organization ruling that the nickel ore export ban violates Indonesia’s commitments under the General Agreement on Tariffs and Trade.

The Indonesian government is not afraid to leverage its control over in-demand commodities to achieve important economic objectives. More than anything, Minister of Investment Lahadalia is sending a message about Indonesia’s willingness to intervene in markets and buck the principles of free trade when it is in its national interest.

This is a message that should be listened to carefully and taken seriously. But trying to cartelize the global production and supply of nickel is a step too far and could easily turn into a case of taking a good hand and overplaying it.