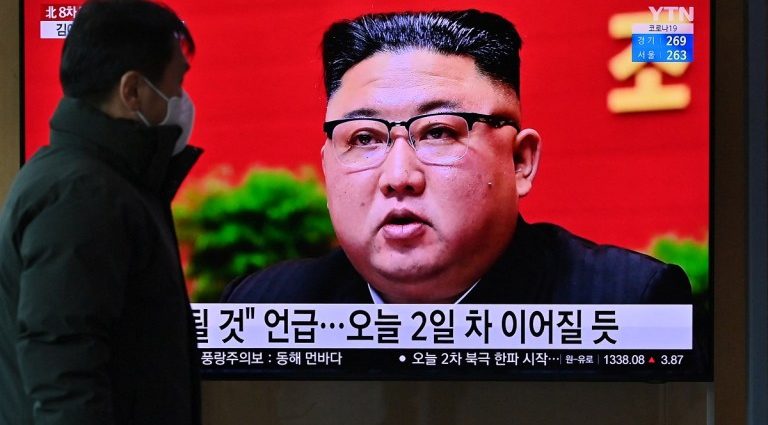 In 2022, North Korea exported tensions through stepped-up missile tests and threats toward South Korea. It also kept a national quarantine that prevented official imports of economic goods in place, but ultimately failed to keep Covid-19 from infecting the country.

North Korea achieved a record number of around 90 missile tests of various types and ranges, including nine intermediate or intercontinental range test launches.

While the number of tests increased exponentially in 2022 compared to previous years, the purpose and strategy behind the tests involved a methodical checking off of military development goals foreshadowed in January 2021 at North Korea’s Eighth Workers’ Party of Korea Congress.

North Korea claimed progress toward a number of its goals, including the testing of a hypersonic gliding flight warhead and of missiles capable of delivering a tactical nuclear weapon. It made ground on developing “an advanced capability for making a pre-emptive and retaliatory nuclear strike”, testing a missile with a range of 15,000 kilometers and ground testing a solid-fuelled engine for longer-range missiles.

Significant items remaining on the checklist include the development of a nuclear-powered submarine and submarine-launched ballistic missile, further development of ‘supersized nuclear warheads’ and the operation of a military reconnaissance satellite.

Additional items not explicitly mentioned at the Congress but foreshadowed in leadership statements include possible nuclear tests and the testing at launch range of an ICBM to demonstrate an atmospheric re-entry capability.

North Korean Leader Kim Jong Un likely perceives the attainment of capabilities outlined in his 2021 five-year plan as essential prerequisites for a return to negotiations with the United States. This explains why the North’s default posture throughout 2022 was to reject US overtures for negotiation.

In addition to heightening tensions with the United States, North Korea was able to pursue missile tests with relative impunity as a result of Russia’s invasion of Ukraine and the rising US–China rivalry, which have both paralyzed the UN Security Council.

North Korea has publicly signaled the strengthening of “strategic and tactical cooperation” with Russia and China and has capitalized on global tensions as a beneficiary of lax Chinese and Russian enforcement of UN sanctions, endorsed and recognized Russian-supported breakaway provincial regions in Ukraine and voiced support for China in opposition to US policies toward Taiwan.

North Korea’s emphasis on pre-emption as a “poisoned pill” designed to deter both internal and external threats to the future of the regime in the codification of its nuclear doctrine on 9 September 2022, may have two motivations.

It could in part be a response to Yoon’s mention of pre-emption as part of his defense strategy toward North Korea, in addition to signaling a rejection of US offers to return to denuclearisation talks.

North Korea’s efforts to take advantage of geopolitical cleavages and intensification of missile testing in 2022 overshadowed its domestic public health and economic challenges.

Following two years of denying any Covid-19 cases and imposing a strict quarantine on contacts with the outside world, Kim Jong Un made a public admission in May last year that Covid-19 had breached North Korea’s quarantine.

State media alleged that the source of the breach was defectors who had returned to North Korea from South Korea, further underscoring the multi-faceted dangers that South Korea poses to the North.

The country quickly declared victory over Covid-19 in August and launched a vaccination campaign shortly after. Regardless of the source or unknown scale of Covid-19 in North Korea, the economic impacts of the quarantine may have been as impoverishing and deadly as the disease itself.

North Korea’s re-centralization of government control over economic activities and its economic retrenchment during the pandemic continued. The state sold government bonds domestically and imposed restrictions on the use of foreign currencies, possibly in an effort to raise scarce hard currency.

These policies almost certainly served to ensure that political loyalty remained a prerequisite for economic opportunity, as they made North Korean economic interactions more dependent on connections with the state and the Kim family. Restrictions on foreign commerce ensured that official exchanges were controlled by politically loyal and well-connected institutions and individuals.

The regime’s ability to earn approximately US$1 billion or more through ransomware, cyber theft and manipulation of cryptocurrencies remained a wild card in North Korea’s restricted economic environment.

Estimates from the US government and the UN Panel of Experts suggest that North Korea’s elite hackers have brought in as much as $2 billion in recent years through cyber activities as dramatic as ransomware and as mundane as infecting networks.

North Korea in 2022 capitalized on illicit exchanges and illegal weapons development while using Covid-19 as a tool to shore up political loyalty. Having come full circle, Kim’s pledges to simultaneously develop North Korea’s military and economy seem more distant than ever in 2023.

Scott Snyder is Senior Fellow for Korea Studies and Director of the Program on US-Korea Policy at the Council on Foreign Relations and co-editor of North Korea’s Foreign Policy: The Kim Jong-Un Regime in a Hostile World. These views contained here are his own and do not represent those of institutions with which he is affiliated.