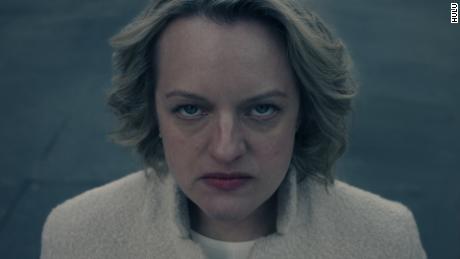 The brutal, cathartic fate of Commander Waterford (Joseph Fiennes), as orchestrated by June (Elisabeth Moss) at the close of the fourth season, left its mark on Serena (Yvonne Strahovski), his widow and partner in the crimes of Gilead.
Yet even in a patriarchal society, Serena is not without the political skills of a survivor. And while she escaped Gilead, June remains unable to let go of her simmering anger (nobody does stares of intense rage like Moss), drawing her back again and again.
While shedding old grievances would surely be the practical move, that’s simply not in her, much to the chagrin of her husband, Luke (O-T Fagbenle). The season thus becomes a sort of prolonged battle of titans, even with the characters separated, offering splendid showcases for Moss and Strahovski as well as an extended rumination on the sacrifices associated with motherhood.
With Moss again wearing multiple hats as star, producer and occasional director, “Handmaid’s Tale” seldom fails to deliver stark or shocking moments. At the same time, the latest season (based on watching eight of its 10 episodes) feels even more guilty of indulging in chapters that play like filler and at best inch the story forward.
Having announced that the sixth season will be the last, the series should benefit from the opportunity to build toward an end game, one that almost nobody could accuse of being premature.
The macro story does explore the relationship of Gilead to the larger world, and uncomfortable questions about what its neighbors will tolerate in the pragmatic pursuit of political accommodation. There are also other less-developed subplots, among them Aunt Lydia (Ann Dowd), and what the burdens of a conscience might look like; Nick (Max Minghella), still pining for June as he seeks to chart his own path; and Bradley Whitford’s Commander Lawrence, whose belief in the goal of quietly reforming Gilead from within has become a central tension on that larger level.
Fundamentally, though, “The Handmaid’s Tale” has labored to match the searing urgency and striking imagery (all those crimson cloaks, which even showed up at a Supreme Court protest) that made its Emmy-winning first season memorable in a way that practically leapt off the screen.
The Hulu series obviously hasn’t lost any of its relevance, and indeed, some of its themes resonate in a more pointed manner. Yet while this season continues the grinding march toward the end of June’s story, it reinforces a sense that despite the promise of a conclusion that lies ahead, the show’s best days are behind it.
“The Handmaid’s Tale” begins its fifth season September 14 on Hulu.
2022-09-14
Previous Post: Korat on alert for RSV respiratory virus after boy’s death
Next Post: Commentary: Who’s courting who at the Xi-Putin meeting?