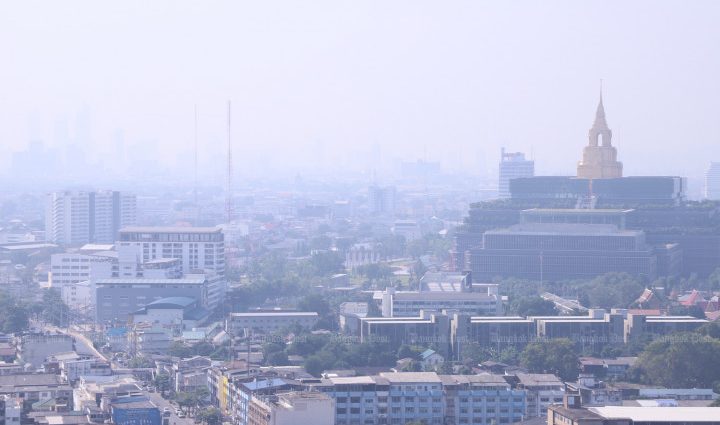 Haze hangs over the capital on Jan 9. Air quality is expected to worsen in the next few days, say forecasters. (Photo: Pornprom Satrabhaya)

Authorities have urged Bangkok residents to work from home and wear respirator masks outdoors as air pollution level worsens in the capital.

Residents should work from home if possible, or switch from personal vehicles to public transport options if they need to commute, Bangkok governor Chadchart Sittipunt said in a statement on Tuesday.

Authorities will seek to control activities causing dust particles such as outdoor burning, construction and combustion from truck engines, he added.

Air quality in the capital has been mostly at unhealthy levels since the weekend with authorities warning that the hazardous dust particles, known as PM2.5, may exceed safe levels again later this week. While the city’s air quality was moderate on Wednesday morning, it is set to slide to unhealthy levels from Thursday, according to the IQAir monitoring tool of AirVisual.

Bangkok and other Thai cities have grappled with poor air quality in recent years, with pollution tending to get worse in the dry season around December to February.

Authorities will “intensively monitor” pollution levels in Bangkok from now until the end of February, Mr Chadchart said. For now, schools in the city should remain open as normal, he said.

Some cities in the northern region and those near Bangkok were battling unhealthy air quality on Wednesday morning, official data showed. Bangkok and 23 other provinces are on the list of cities with high levels of PM2.5, according to the Ministry of Public Health.

Health authorities across all 77 provinces will closely monitor PM2.5 levels and will open emergency operation centres in any province where unhealthy readings persist for more than three days, according to Opas Karnkawinpong, the ministry’s permanent secretary.

Patients with pollution-related diseases in local hospitals have more than doubled to nearly 213,000 this week, from about 96,000 last week, due to the worsening air quality, Dr Opas said.