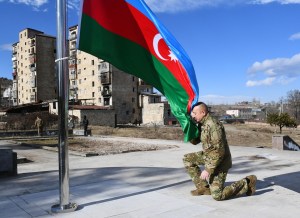 The latest round of fighting between Armenia and Azerbaijan will come as little surprise to most. After all, the two states have been locked in various levels of conflict for three decades, ranging from low-level exchanges of fire to the full-scale warfare that engulfed the disputed Nagorno-Karabakh region in 2020.

Yet the latest bout marks a major escalation, one that, if allowed to continue, could lead to a humanitarian catastrophe and even a regional war.

Just after midnight on Tuesday, September 13, Azerbaijani forces launched a wide-ranging assault on Armenian positions across nearly 200 kilometers of their shared border. The offensive included drones, artillery and armored vehicles, and Azerbaijani strikes reached targets up to 40km inside Armenia.

Artillery fire rained down upon Armenian towns and villages, including the resort town of Jermuk, destroying civilian homes and apartment blocks.

By the time fighting stopped with a tenuous ceasefire on Wednesday evening, more than 200 soldiers had been killed (135 from Armenia, 71 from Azerbaijan), 7,500 Armenian civilians had been displaced, and Azerbaijani troops had advanced more than seven kilometers into Armenia.

There was little doubt who started the fighting. Azerbaijan initially claimed that it was merely responding to Armenian “provocations” – a claim echoed by its ally, Turkey – but largely dropped this rhetoric in the following days in favor of other justifications.

The same pattern has been seen repeatedly in the past two years, including during the 2020 war – in which a long-prepared assault was initially billed as a “counteroffensive” – and Azerbaijan’s attack last month on Armenian positions in the Lachin corridor connecting Karabakh with Armenia proper.

The goals of the assault were not immediately clear, but they fit with Azerbaijani policy since the end of the 2020 war.

Azerbaijani President Ilham Aliyev believes Armenia made a major mistake when it failed to force his country to sign a full treaty enshrining the gains from Armenia’s victory in the First Karabakh War, which ended in 1994.

Aliyev is determined not to repeat his enemy’s error. Instead, he is seeking to force Armenian Prime Minister Nikol Pashinyan to the table to sign a document that would relinquish what remains of the Nagorno-Karabakh Republic to Azerbaijani control.

Similarly, Aliyev wants Armenia to give his forces exclusive control over a sovereign corridor connecting mainland Azerbaijan with its exclave of Nakhchivan – something he claims Azerbaijan is owed as a result of a false interpretation of the final clause of the 2020 ceasefire agreement.

Perhaps most important of all, the attacks occurred simply because they could. With Russia bogged down in Ukraine and other powers in no position to intervene, Aliyev took the chance to humiliate his Armenian enemies and demonstrate Azerbaijan’s continued primacy on the battlefield.

The Russian absence from all of this has been striking. Russia is a major ally to Armenia and where Moscow once wielded enough influence over Azerbaijan to halt its aggression, bringing the 2016 “April War” to an end in just four days, it now appears helpless before Baku.

The present offensive took place just days after Moscow’s forces were routed by Ukraine in the Kharkiv region, reinforcing growing perceptions of Russian impotence. The Russian-led Collective Security Treaty Organization (CSTO), a defensive bloc including Armenia and four other former Soviet states, was meanwhile fully exposed as a paper tiger after failing to honor Armenia’s invocation of the mutual defense clause its charter contains.

With Russia ever more politically and economically isolated, Vladimir Putin has evidently decided there is nothing to be gained by standing up to Azerbaijan or Turkey, two countries whose friendly relations he desperately needs.

That leaves the response of other powers. The European Union has provided little of anything beyond soft calls for “restraint by both sides.” Many Armenians rightfully point to a July visit by European Commission President Ursula von der Leyen to Baku, where she posed beaming for the cameras alongside Aliyev to sign a gas deal, as further emboldening Azerbaijan’s actions.

Iran, meanwhile, the other major state in the region, has repeatedly stated that it considers any change in the borders of the region “unacceptable,” especially anything that would cause it to lose its transit corridor through Armenia to the Black Sea (via Georgia). It remains unclear, however, whether Tehran is willing to do anything tangible that might affect Baku’s calculus.

That leaves the United States. As the only other actor capable of influencing Aliyev’s appetite, Washington’s response has been surprisingly robust. State Department officials have shifted their tone from the usual calls for restraint from both sides and placed the blame for the fighting unequivocally upon Baku.

House Speaker Nancy Pelosi visited Armenia last weekend where she condemned Azerbaijan’s “illegal and deadly attacks.” It will require more than just words to cow Aliyev, but tangible measures may be forthcoming: By all accounts, it was American pressure that persuaded Baku to cease its offensive last Wednesday night.

The reality is, however, that more attacks are probably coming. Azerbaijan, which never confirmed the ceasefire itself, spent the next few days spreading news of alleged Armenian “saboteur” groups being discovered and destroyed, including in the enclave of Nakhchivan, from where Armenia has warned of a new offensive.

Azerbaijani officials started to call openly for a “buffer zone” on Armenian territory, one that would be large enough for the settlement of those displaced by the fighting.

Pelosi’s visit made it clear that the US is watching the region closely and would use levers at its disposal to dissuade Azerbaijan from attacking again. One must hope they are enough.

This article was provided by Syndication Bureau, which holds copyright.