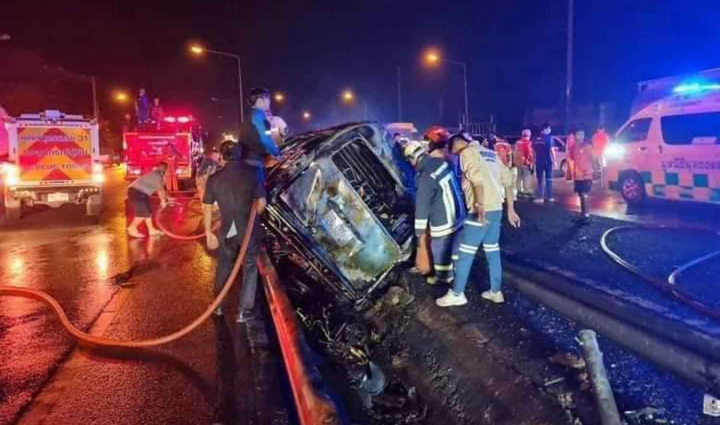 A van crashed into the median ditch on the Mitrapap highway in Si Khiu district, Nakhon Ratchasima, and went up in flames on Saturday night. Eleven people were burned to death, while one passenger was able to escape the vehicle and was admitted to hospital. (Photo: Prasit Tangprasert)

Yingyos told AFP that one man had been able to climb out a window, but the other passengers were trapped and died in the blaze.

The survivor, Thanachit Kingkaew, a 20-year-old student, said he was asleep when he was jolted awake after hearing someone scream.

“I woke up and the next thing I know, the van was upside down. I didn’t see what happened,” he said.

“After the crash, the fire started engulfing the whole van starting from the back.”

“I started kicking the windows and managed to crawl through a small hole,” he said.

“Soon after that, the van exploded.”

Nikhom Seaun, a volunteer with a local rescue team, said the van exploded just seconds after it was engulfed in flames.

“It took less than 30 seconds for the fire to consume the whole van,” he said.

“I couldn’t do anything with the fire extinguisher I had. The van then exploded three to four times.”

Yingyos, the police colonel, said the van used both fuel and compressed gas but initial reports found the gas tank had not leaked.

“We think that the fire was caused by the fuel,” he said, adding they were still investigating what caused the vehicle to veer off the road.

Traffic accidents are common in the kingdom, which has a notorious road safety record, particularly during busy public holidays.