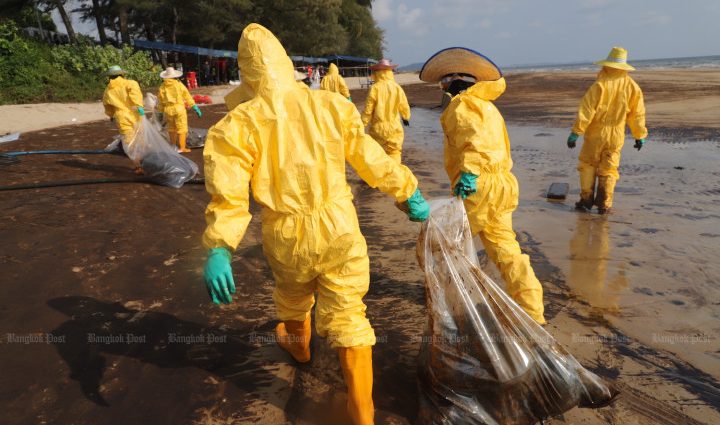 The lawsuits allege a lack of maintenance of an underwater oil pipeline owned by Star Petroleum, which leaked about 47,000 litres of oil into the ocean on Jan 25 last year, said the Rising Sun law firm, which is representing the group of 837 complainants.

Some of the oil reached the shoreline of Rayong, causing damage to the local environment and tourism, notably along Mae Ramphueng beach and Koh Samet. A smaller spill of around 5,000 litres took place on Feb 10 last year.

Rising Sun said the lawsuits also included complaints over failure to deal with the leak and excessive use of dispersant to clean up the water. Separate suits were filed against government agencies to speed up rehabilitation of the ecosystem and pressure Star Petroleum and PTTGC to set up a rehabilitation fund worth 5 billion baht for the affected communities.

Star Petroleum said in an e-mail that it has provided 337 million baht in relief for 12,361 people so far and that it could not comment on legal cases.

PTTGC did not immediately respond to a Reuters request for comment. US-based Chevron, which holds a 60.56% stake in Star Petroleum, declined to comment.

“About 70% of those who been affected have received assistance from the companies,” Athapol Charoenshunsa, director-general of the Department of Marine and Coastal Resources, told Reuters on Monday.

“But some have not received what they demanded and they are within their right to take legal action.”

SPRC said earlier that it had worked with academics from three leading universities to carry out 11 marine study projects. It also said it has set up a panel to consider the appeals and claims of those affected.