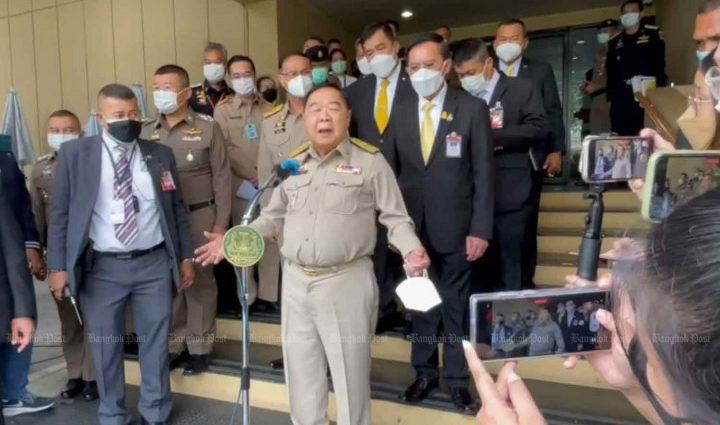 Deputy Prime Minister Prawit Wongsuwon has confirmed his close ties with Prime Minister Prayut Chan-o-cha, but said he would not try to stop him leaving the Palang Pracharath Party (PPRP) with some of its MPs if he ever planned to.

Gen Prawit was responding to reporters’ questions at Government House on Monday about rumours that Gen Prayut would move to the Ruam Thai Sang Chart Party. They asked if Gen Prawit had discussed the issue with Gen Prayut.

Gen Prawit said he had not discussed the possibility with Gen Prayut and it was a decision Gen Prayut would have to make for himself.

Gen Prawit, the PPRP leader, said he had no appointments with any party members to discuss the party’s selection of a prime ministerial candidate.

Asked why he did not discuss political issues with Gen Prayut, Gen Prawit smiled and replied, “You should be in my position.”

Gen Prawit said he saw Gen Prayut every day but they did not discuss political issues concerning Gen Prayut.

He also confirmed that he, Gen Prayut and Interior Minister Gen Anupong Paochinda would remain close, as they had been for 40-50 years.

When reporters told him there were indications Gen Prayut could leave for another political party, Gen Prawit said, “If he wants to go, he can go. That is okay.”

Asked what he would do if Gen Prayut left and took some PPRP MPs with him, Gen Prawit laughed and said, “Let them go. I don’t mind. They can go where they want to. It’s their personal choice.”

Asked if he would would try to prevent Gen Prayut leaving PPRP, Gen Prawit said, “I wouldn’t stop anyone.”

Asked about some PPRP members’ comments that Gen Prayut was not a selling point for the party anymore, Gen Prawit said that was their personal opinion. The selection of PPRP’s candidates for prime minister would be a decision for the party, not of any one individual.

Gen Prayut told reporters on Monday that he was focused on preparing for the Asean summit in Cambodia, to be followed by the Asia-Pacific Economic Cooperation summit in Bangkok.

Asked if he would have a clear answer on his political future after the Apec summit, Gen Prayut nodded.