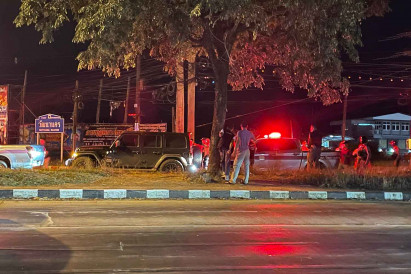 The border checkpoint with Cambodia at Khlong Hat district in Sa Kaeo province where a Cambodian officer drove through in a Jeep on Saturday without permission. (Photo supplied)

An armed Cambodian army colonel was arrested after a 17 hour stand-off and charged with illegal entry and other offences after driving through a border checkpoint into Thailand without stopping into Khong Hat district of Sa Kaeo province on Saturday afternoon, police said.

After crossing the border in a jeep, the Cambodian officer resisted arrest by immigration police. Police surrounded him to prevent him fleeing.

About 2.30pm on Sunday, after a 17-hour stand-off, police took him into custody.

He was then identified as Col Sok Banpho, 36. He was carrying a CZ P07 pistol and 17 rounds of 9mm ammunition.

He declared he was stressed out after having quarrelled with his wife back in Cambodia, but refused to talk any further to police investigators.

Police contacted the Cambodian authorities. They were advised to proceed with legal action against Col Sok Banpho and repatriate him after he had gone through all proceedings.

Maj Gen Sirichan Ngathong, army deputy spokeswoman, said on Monday the Burapa Task Force had closely monitored all developments during the incident, through the Thai-Cambodian border coordination office. She confirmed that the incident was not military related and legal action was being taken against the Cambodian officer under Thai law.

Maj Gen Sirichan said the Thai and Cambodian armies have a good mutual understanding and cooperate closely. The Cambodian army had thanked the Burapa Task Force and Thai police for having properly handled the situation.