Learning lessons from dependency on a hostile power 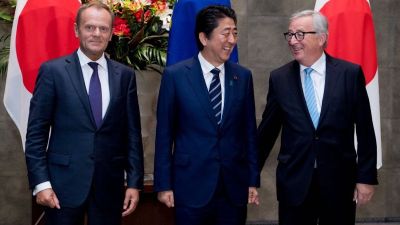 Many of us who live in liberal democracies used to believe in something we called “engagement” with authoritarian powers such as China and Russia.

Germans had a more specific phrase for it: “Wandel durch Handel”, which means change through trade. Russia’s invasion of Ukraine, however, has taught us to replace these phrases with a different one: dependency.

The funny thing is that part of the point of engagement was precisely the idea of dependency, just a dependency that was mutual. The belief was that through increased economic interdependence, and knowledge of each other, both sides would share an interest in maintaining good relations and avoiding conflict.

Now, after the Russian invasion of Ukraine and amid increasing fear of Chinese military intentions toward Taiwan, the prevailing belief is that dependency on potentially hostile suppliers or markets can be dangerous.

National strategies, both on security and for energy or industrial policy, are being redrawn so as to avoid the risk of dependency. What we don’t yet know is how far this avoidance of dependency can go.

We need to remember that the idea of engagement was not just or even mainly a political idea. It also depended on the force of self-interest, of allowing business to be done profitably with other large, growing economies – and on realism: These countries exist, they are not going to go away, so we have to find a way to live with them. If we don’t sell them goods and services, or buy theirs, others will step into our place.

For although engagement has gone out of fashion, the question still hangs in the air: What, truly, was the alternative? If the West had not “engaged” with China and Russia during the past 30 years, what would it have done instead?

Can countries like Japan or Britain or Germany or even the United States really decide totally to shun powers that are the size and importance of Russia or China? Would it really make sense to turn your back on them?

We shall find out the answer to this during the coming months and years. Certainly, both the West – especially Europe – and Russia are learning an important lesson from the war in Ukraine. It is that dependency on a hostile power for supplies of a crucial commodity – in this case, energy – can be turned into a weapon of war.

Yet, for Russia, the further lesson is that Europe has proven much more capable of dealing with that weaponization of energy supply than it expected, more capable of finding alternative supplies quite quickly and more capable of absorbing the economic costs of doing so.

This promises to do more long-term damage to Russia than to the West. By weaponizing the supply of gas, Russia has lost its major customer, probably permanently, without gaining any sustainable advantage in the war.

It is possible to imagine Europe returning as a buyer from Russia after the war has finished, but it will not buy anywhere near as large a quantity of Russian gas as it did before.

Russia has badly underestimated the political resolve of European governments and the resilience of their public opinion, which has remained firmly supportive of Ukraine and is now determined to avoid such dependency in the future.

This has been helped by the fact that decarbonization through the replacement of fossil fuels with clean and renewable energy sources is both necessary and popular, depending on the cost.

It is impossible to predict how the war will evolve from now on, but however the war evolves it is likely to be bad for Russia. At the same time, it will be good for Europe, for it has shown great solidarity and resilience and will at the same time have taken a great leap forward in its efforts to rely less on fossil fuels in the future.

Now, attention in Europe is turning to concern about dependency on China.

Europe’s potential risk of dependency on the world’s second-largest economy is not as focused on a single sector as it is with Russia. But concern is rising about the dependency – especially of German and Italian exporters – on the Chinese market and of all European manufacturers of electric batteries on Chinese supplies of critical commodities.

The effort to assess and manage dependencies on China promises to be a major preoccupation in the next few years.

But there is an irony in all this new focus on dependency. It is that the war in Ukraine has also exposed, and deepened, another sort of dependency, one which Japan shares with Europe: reliance on the United States for the supply of advanced weapons and military-related technology.

European governments, led by Germany, all say that they plan to raise their annual defense budgets to at least 2% of GDP, which is the NATO standard. So does Japan. That is welcome if it enables Europe and Japan both to take on more of the burden of their own security.

Yet where are Europe and Japan likely to be able to buy whatever extra military hardware or technology that they want, in order to fulfill those promises? The main answer is the United States.

The effort by Europe and Japan to contribute more to defense and security in their regions and more to protect themselves will lead all those countries to become more dependent on the United States. Yet is the United States necessarily a dependable partner, looking ahead to the next few years and the rest of this decade?

The political polarization of the US means that we cannot be confident that America’s democracy will survive and thrive as “the leader of the free world” that it has long claimed to be. Nor can we be sure it will be friendly – democratic or not.

Already, under president Donald Trump, the US aimed tariffs at its European and Japanese allies on imports from them of steel and aluminum on supposed national security grounds, tariffs which have not yet been formally repealed.

This, then, is Europe’s task, one which Japan is already emulating. It must play its proper role in defense even as it is reducing its dependency on Russian gas or oil dramatically. It must seek to separate itself from China in any field in which dependency looks like a potential geopolitical and security risk.

But also it must look for ways to reduce its dependency on the United States for defense technology by strengthening its own defense industries, perhaps in partnership with Japan.

This dependency-based strategy is going to dominate policy for years to come. And it will be devilishly difficult.

Bill Emmott, a former editor of the Economist, is an independent writer, lecturer and consultant on international affairs.

This article, originally published on The Mainichi news site and in the Japanese Mainichi Shimbun newspaper on October 30, 2022, is republished with kind permission.

2022-11-05
Previous Post: How cops busted a scam call centre in Taiwan targeting victims in Singapore
Next Post: Malaysia GE15: How are parties in Johor planning to win votes, and possibly reclaim seats?