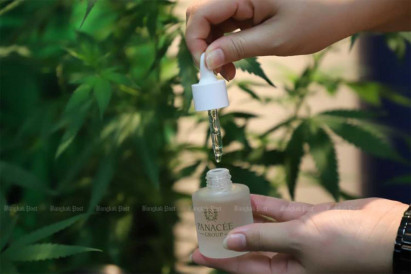 A woman shows a cannabis product at an exhibition at the Public Health Ministry’s Department of Health Service Support in Nonthaburi in July. (Photo: Pattarapong Chatpattarasill)

Democrat leader Jurin Laksanawisit has denied a rift with the coalition-partner Bhumjaithai Party over cannabis legislation, saying his party supports its use for medical purposes, not liberalisation of it.

Mr Jurin was responding to criticism that the forced withdrawal from the House business agenda of the Bhumjaithai Party’s flagship legislation was politically motivated ahead of the coming general election.

On Wednesday, the Cannabis and Hemp Bill, which had already passed its first reading in the House of Representatives and been heavily revised by a scrutiny committee, was dealt a major setback. The House voted 98 to 136 with 12 abstentions to withdraw the bill for improvements to be made to it, over the objections of Bhumjaithai, which sponsored the legislation.

Mr Jurin denied that his party’s opposition to the bill was politically motivated. The Democrat Party took into consideration the interests of young people and the country’s future, he said.

The party supported the use of cannabis and hemps for medical purposes, but not liberalisation of the plant’s use. It was showing that it was a political party that cared about the country, the Democrat leader said. He believed other political parties shared the same view.

On the Bhumjaithai Party’s response  that the withdrawal of the bill would push people growing cannabis outside the law, Mr Jurin said the future of the country must be above everything else. Long-term effects must also be taken into consideration when solving problems regarding this issue, he said.

Asked about Public Health Minister and Bhumjaithai leader Anutin Charnvirakul’s remarks that the withdrawal of the bill, which was already competely revised, would hurt many people, Mr Jurin said Mr Anutin may look at the matter from a different angle. The Democrat Party saw it necessary to act to solve problems that may afffect people in the future.

He declined to say if the bill would be re-tabled in time for the next parliament session. It was up to a House committee to amend the bill to ensure medical use, not liberalisation of cannabis, Mr Jurin said.

For the time being, the Public Health Ministry could use other measures to control cannabis use, he said.

Mr Jurin said that in the past, bills sponsored by the Democrat Party had been rejected. For example, seven draft constitutional amendments had been submitted to parliament, but only one charter amendment bill had been passed.

The party had never criticised the other political parties, because it respected the vote of the parliament,  Mr Jurin said.