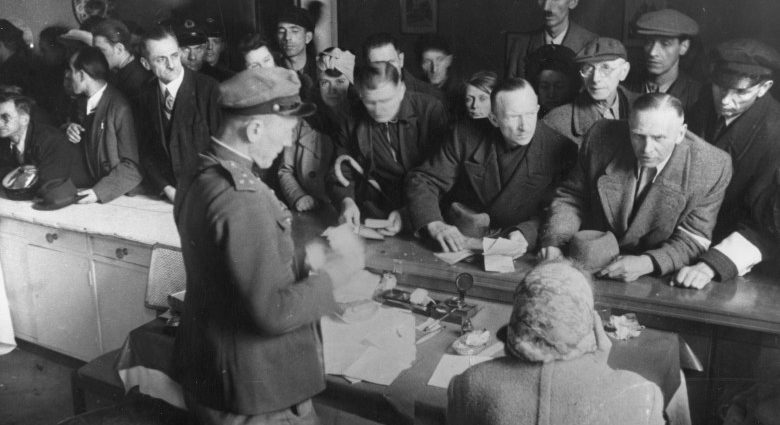 Even as the Ukrainian military in September 2022 retook some territory lost to the Russian invasion, Moscow has been quietly fortifying the land it holds, which it intends to keep. Russian forces still control about 20% of Ukraine, and the Kremlin states it is not prepared to stop fighting.

The approach President Vladimir Putin has taken – and looks likely to continue to pursue – is in keeping with his false claims that he is “denazifying” Ukraine. In fact, as a scholar of denazification, the current Russian plans are strikingly similar to those the Soviet Union used during its military occupation of Germany after World War II.

Russia conducted a smaller-scale version of the expected political and cultural purge after invading Ukraine’s Crimea Peninsula in 2014, immediately staging a rigged election that appeared to ask Russia to annex the region. A recently published report by government-run media outlet RIA Novosti lays out a similar plan for the rest of its Ukraine occupation.

Russia is following a Soviet-created playbook, and Moscow is likely to attempt to annex large swaths of eastern Ukraine, including most of the Donbas, and also install pro-Russian proxy officials in regions to the south.

After Germany fell in 1945, the four allied powers – the United States, the United Kingdom, France and the Soviet Union – divided and occupied the country’s territory and sought to drive out Nazis from power and influence. The Soviets controlled the northeastern quadrant of the country, which later became East Germany.

The Soviet denazification program was the most sweeping. Tens of thousands of German civilians were arrested and interned for their Nazi affiliations, some in “special camps,” where one-third of detainees died from starvation or disease. These were added to the 3 million German prisoners of war already held by Russian forces, many of whom were not released until 10 years after the war’s end.

Many more German citizens were subject to mass screening for employment. Upwards of 500,000 public and private workers – teachers, doctors, police officers, artists, managers – were summarily fired because of their membership in Nazi groups.

Government officials at all levels were removed and replaced by trusted “anti-fascists,” many of them trained in Moscow. Around 850,000 Germans were convicted of political transgressions under so-called purification laws and made to face tribunals. Some lost their jobs, while others were imprisoned.

The military government seized private bank accounts and the assets of small-business owners, and industrial equipment was sent to the Soviet Union as economic recompense for the war. All the while, Russian soldiers terrorized the occupied population, including raping as many as 2 million German women.

As the occupation dragged on into the late 1940s, the Russians permitted former Nazis to reapply for their jobs, as long as they joined the ruling communist party and accepted the authority of the Soviet forces. Thousands of Germans did so, as this was the only path to financial recovery.

By 1949, Moscow had completed its takeover of eastern German political and economic systems. Rigged elections led to the installation of a puppet dictatorship. Despite some major failings along the way, denazification proved an effective instrument of political control – East Germany remained the Soviet Union’s strongest ally throughout the Cold War.

Denazification by the American, British and French occupiers was similarly comprehensive, but more democratic in its nature and its methods. West German political and social institutions were ultimately granted autonomy and sovereignty.

An April 2022 report in Russian government-run media commemorated the Soviet purge in Germany, while also propagating a new definition of Nazism.

According to the report, the modern Nazi is anyone who self-identifies as Ukrainian or who supports Ukrainian sovereignty. It also laid out a detailed plan for the systematic elimination of what it called Ukro-Nazism, which closely resembles the Soviet denazification effort 75 years ago.

Some of the initial steps include the creation of Russian-backed government administrations and police forces and the mass arrest of “Nazi collaborators.” There are also strict censorship laws and re-education programs, as well as investigations of individuals allegedly spreading Nazi ideology.

Other measures include the establishment of memorials and monuments to the victims of Ukrainian Nazism and the creation of permanent denazification bodies for a period of 25 years to investigate suspected Nazi activities.

Each of these actions is part of a larger strategy to eliminate Ukrainian identity.

In Russian-controlled territories, Putin appears to be following the playbook of the past. As that continues, we can expect an increase in political rhetoric and the further adoption of occupation tactics used in the past. Moscow has not only declared its intent to follow the Soviet playbook, but also demonstrated it, first in Crimea in 2014, and now in eastern and southern Ukraine.

A pattern has emerged, with predictable next steps. Using history as our guide, we can expect that additional security control measures will be taken, such as strict censorship and the disarming and incarceration of civilians. That will likely be followed by political and bureaucratic realignment – mass dismissals and appointments, police reforms and banning of political and social organizations.

And then will come social orientation projects – destruction of Ukrainian culture, historical revisionism in schools and museums and pro-Russian indoctrination of youth. All the while, Ukrainians will endure military-style terror and political tribunals.

The Russian state media will continue to label Ukrainian soldiers and civilians as dangerous Nazis to defend draconian policies and downplay atrocities. Manufactured evidence of Nazi infiltration will be paraded in front of domestic audiences in Russia to justify a costly war.

Guided by a revered historical precedent, Putin’s war against Nazism can be expected to gain more attention as the Russian occupation regime strengthens its foothold in the Ukraine territory it still holds.