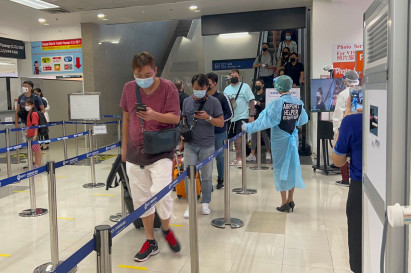 Revenue this year expected to reach half of pre-pandemic levels

Chiang Mai expects its tourism-related income to hit 55 billion baht by the end of the year, or about half the level recorded in 2019 before the Covid-19 pandemic struck.

The outlook for the northern province has improved considerably since the middle of the year, said Suladda Sarutilavan, director of the Chiang Mai office of the Tourism Authority of Thailand (TAT).

That puts the probvince on track for full-year revenues of 55 billion baht, compared with 100 billion baht in 2019, she said.

In July alone, Chiang Mai welcomed 574,357 tourists, up more than 700% from a year ago when many travel restrictions were still in place. The figure included 49,301 foreigners — nearly 50 times more than a year ago.

The first flight was 90% full. Passengers included Vietnamese nationals and international tourists travelling from Vietnam to Chiang Mai, said Natapon Banpakan, an executive of the carrier.

The airline is initially operating three flights a week — on Tuesdays, Thursdays and Sundays — and is contemplating adding more services between Chiang Mai and Fukuoka and Osaka in Japan, he said.

The airline has observed strong demand for air travel among Japanese tourists intending to travel directly from these cities to Chiang Mai, he said.

Ms Suladda said Chiang Mai expects to welcome up to 5 million tourists next year and will focus on improving its economic, social and environmental sustainability.

“The number of visitors isn’t the only important indicator of success in our efforts to revive tourism here,” she said.

Thailand’s tourism-reliant economy is recovering steadily despite global inflation seen as a key risk factor, said Warangkana Imudom, director of the northern office of the Bank of Thailand.

Since July, she said, the tourism sector appears to have picked up speed with an impressive rise in both Thai and foreign visitor numbers, she said.