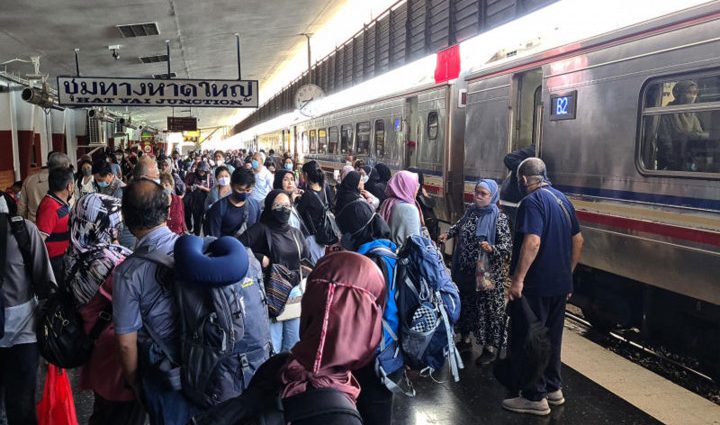 Both commercial and ordinary passenger trains seeing uptick in demand

The number of passengers using State Railway of Thailand (SRT) trains has improved to two-thirds of pre-pandemic levels, according to governor Nirut Maneephan.

About 20,000 passengers on average are using SRT commercial trains daily, compared with around 30,000 per day before Covid-19 struck in early 2020.

The recent peak, at nearly 29,000 per day, came during the long national holidays in August, he said.

On so-called ordinary trains that have only third-class carriages, daily passengers have averaged 45,000, or 66% of the pre-pandemic figure of 68,000, Mr Nirut said.

Commercial trains, offering more onboard services and greater seating and price options, are now operating on 66 of 84 routes. Ordinary trains are back on 144 out of 152 routes, he said.

The increasing number of passengers, especially European and Indian tourists, is a result of the government lifting travel restrictions.

Mr Nirut said the SRT is now in the process of buying 50 new diesel-electric locomotives. Twenty have been certified while the others will be acquired from the end of this year to early next year.

The new locomotives will enter service on commercial and cargo trains beginning next month. They will travel on the northern line, the southern line to Trang and the northeastern line to Nong Khai province.

The new diesel-electric locomotives will allow commuter trains to travel at 120kph and cargo trains at 70kph.

Mr Nirut said the SRT has 212 locomotives, not including diesel-electric ones, but only 70–80% of them are fully operational at present.

The agency ran a trial in April for new Chinese-made locomotives carrying 115 commuter carriages with one tonne capacity each from Bang Sue Grand Station in Bangkok to Chachoengsao Junction Station.

These locomotives were produced by CRRC Qishuyan Co.

The SRT plans to replace decommissioned locomotives with the new models for more efficient commercial and cargo service.