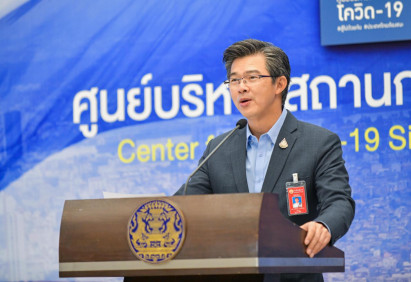 A doctor at Chiang Saen Hospital who went viral for ranting at a patient following a disagreement over treatment has now been suspended indefinitely, the hospital said yesterday.

In remarks yesterday, the hospital said the doctor in question has now been suspended indefinitely, as opposed to five days as it had initially ordered.

The hospital has also ordered an internal investigation into the incident.

In a video which went viral on social media over the weekend, the doctor could be seen sitting cross-legged on a chair, fiddling with a mobile phone while engaging in a verbal argument with the patient and the patient’s relatives.

At one point in the video, the doctor could be heard calling the patient “stupid”.

The patient, a 36-year-old pregnant woman, had come to the hospital to seek treatment for her nausea and vomiting, for which the doctor prescribed an injection.

However, the patient refused the treatment as she feared it may aggravate her heart condition.

A heated argument with the doctor immediately broke out.

Sookchai Theansavettrakul, Chiang Saen Hospital director, said he regretted the incident, adding the problem stemmed from a miscommunication between the doctor and a patient and her relatives.

Following the hospital’s decision, the Public Health Ministry acknowledged the need to improve the doctor-patient ratio at hospitals nationwide, to alleviate the stress and pressure on medical staff, especially at state-run hospitals and other medical facilities.

Taweesilp Visanuyothin, the ministry’s deputy permanent secretary, said the ministry would increase manpower in areas plagued by medical staff shortages over the next five years in a bid to alleviate the problem.

Staff surveys will be conducted soon, starting in the North and the Northeast given their large population.

Staff working in areas which do not experience shortages may be re-assigned to other areas to help balance the load, he said.

Yongyud Wongpiromsarn, an adviser to the Mental Health Department, said medical workers are concerned about their stressful working conditions.

He said there should be measures to prevent friction between the doctors and patients.

“No one can say for sure who is totally right or totally wrong in this situation,” he said, adding that hospitals should have a dedicate mental health unit for staff.