Revisiting ‘The Tao of Physics’ 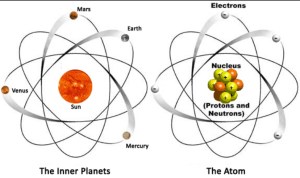 In 1975, the American physicist Fitjof Capra published the first edition of his best-selling book The Tao of Physics. Capra described the parallels between the ancient Chinese notion of Tao and the subatomic world of particles revealed by quantum physics.

Capra’s book opened the door to both quantum physics and Eastern mysticism for millions of people. His book also raised awareness of the fact that quantum-physics pioneers like Bohr, Schrodinger and Heisenberg were fascinated by Eastern spiritual traditions.

But Capra was also criticized by members of the quantum-physics community. Some argued that Capra used vague accidental similarities of language to show deeper connections between quantum physics and Eastern mystical thought.

Others complained that Capra had neglected the latest developments in quantum physics, the convoluted debate about the standard atomic model and Einstein’s Relativity Theory.

Despite decades of intense efforts, the two models have resisted integration. Fortunately, the Tao is easier to understand than quantum physics.

The Chinese view of Creation gives us a first clue. The ancient sages said: “When the yin and the yang, initially united, separated forever, the mountains poured forth water.” Water pouring from a mountain is a manifestation of “Tao in operation.”

Some 3,000 years ago, the anonymous author(s) of the I Ching concluded that the universe is based on a binary structure that consists of mutually complementary opposites: dark and light, negative and positive, attraction and repulsion, Heaven (the universe) and Earth.

The sages codified the cosmic binaries with a broken line for yin and an unbroken line for yang. They next created the Eight Trigrams, representing eight binary “gradations” of yin and yang, one pure yin, one pure yang, and six combinations that are either predominantly yin or yang.

The development of the yin-yang theory may have been related to the discovery of magnetism, which is central to one of the oldest of all Chinese arts, geomancy or Feng Shui. Geomancy was prevalent in both the Oriental and Occidental worlds.

Like their Greek contemporaries, the Chinese discovered that certain stones (called lodestones) had magnetic properties. We find an early Chinese reference to lodestones in The Book of the Devil Valley Master (Guiguzi), written in the 4th century BC.

Alluding to its power to attract, the book refers to the lodestone as “the loving stone.” It also discusses the “south-pointer,” a lodestone placed on a smooth surface that always points south. The book notes: “When the people of Cheng [Zheng] go out to collect jade, they carry a south-pointer with them so as not to lose their way.”

The discovery of the lodestone led to one of China’s most important inventions: the magnetic compass. “The magnetic compass,” Sinologist Joseph Needham wrote, “is the oldest representative of all those dials and pointer-readings which play so great a part in modern science. The sundial was, of course, far older, but there only a shadow moved, not part of the instrument itself.”

The magnetic compass uses a magnetized needle. When used to determine the north-south axis of the Earth, the magnetic needle will briefly oscillate and then settle at the point where it is perfectly aligned with the Earth’s polarity.

In Chinese cosmology, north is yin and south is yang. The magnetic tension between them is governed by qi (or ch’i), one of the most important notions in Chinese culture. The word qi has been variously translated as vital force, ether, cosmic breath, spirit, and matter-energy.

The Chinese written language suggests that the Chinese associated qi with (electro) magnetism. The pictogram for qi is used in the compound character for electricity as well as in the characters for Tai Chi and Qigong. In Japan, where they speak of ki, the character is also used in words like denki (electricity), and the martial art aikido.

Wherever these are yin-yang polarities, there is qi. In the words of the Taoist sages, “Qi resides in tension.” The Chinese are subconsciously aware of qi at multiple levels. It is part of the psychological makeup. Qi is symbolized by the most famous of all Chinese symbols, the Dragon.

In 1831, British scientist Michael Faraday observed that a magnet can generate a measurable electric current when moved near a copper coil. He found that the magnetic flux induces an electromotive force, suggesting that electricity is a form of agitated magnetism.

In 1897, Cambridge physics professor J J Thomson, building on the work of Faraday, discovered the first subatomic particle, the electron, and by 1920, European physicists had developed a complete picture of the atom, the so-called standard model.

Quantum physics gave credence to the ancient Chinese view of the world. The magnetic force they called qi is the substratum of the universe. Everything from the micro to the macro cosmos is part of one seamless continuum.

In a curious twist, quantum physics ended the age-old discussion about the ether, the closest European equivalent to the Chinese notion of qi.

Before the quantum revolution, most European scientists assumed the ether was the invisible layer behind all existence. Up to the early 20th century, most physicists assumed that radio waves traveled through the ether.

Quantum physics virtually ended the debate about the ether. It could not be measured and hence was assumed not to exist, and physicists argued that Albert Einstein’s spacetime theory explained away the ether. Einstein was less certain.

In a lecture he gave at Leiden University in 1920, Einstein explained that General Relativity does not require the ether, but that it does not preclude its existence. The quantum-physics community was virtually united in rejecting Einstein’s claim, saying he was just wrong.

The Chinese never abandoned their notion of qi. It is part of the warp and woof of Chinese culture. But the Chinese do not excel in explaining their culture to the world at large. Conversely, the West has not always excelled in listening.

James Legge, the Scottish Sinologist who first translated the I Ching into English, ridiculed Chinese claims that their ancient book anticipated modern electromagnetic sciences. In the introduction to his translation of the I Ching, Legge wrote:

“Chinese scholars and gentlemen … who have got some little acquaintance with Western science, are fond of saying that all the truths of electricity, heat, light and other branches of European physics are in the Eight Trigrams.

“When asked how, then, they and their countrymen have been, and are, ignorant of those truths, they say that they have to learn them first from Western books, and, then, looking into the I Ching, they see that they were all known to Confucius more than 2,000 years ago.

“The vain assumption thus manifested is childish; and, until the Chinese drop their hallucination about the I Ching as containing all things that have ever been dreamt of in all philosophies, it will prove a stumbling block to them, and keep them from entering the true path of science.”

Fritjof Capra, unlike Legge, understood that not everything in life can be captured by empirical science and rational thought. Capra wrote: