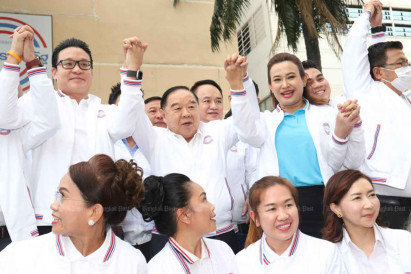 Deputy Prime Minister and leader of the Palang Pracharath Party, Prawit Wongsuwon (centre), poses with the party’s potential candidates for Bangkok and other provinces at its head office on Tuesday. (Photo: Pattarapong Chatpattarasill)

Gen Prayut is expected to make his debut as a prospective prime ministerial candidate for the United Thai Nation (UTN) Party on Saturday, when he will lead the party’s pre-election campaign in the southern province of Chumphon.

Despite speculation that he will be announced as the UTN’s top prime ministerial candidate, Gen Prayut has, until this point, only been declared a member of the newly established party.

Gen Prayut is expected to deliver his campaign speech and meet supporters in person before returning to the capital the same day.

Gen Prawit, who serves as the leader of the ruling Palang Pracharath Party (PPRP), will also reportedly lead the party’s campaign and meet voters in the southern province on Saturday as well.

Asked about Gen Prawit’s planned visit on the same day, Gen Prayut said the PPRP leader could go anywhere he wished and that he had no problem with it.

“There is no problem if we go there on the same day. Stop presenting news like this. It is not useful,” Gen Prayut told reporters.

Asked if it would be a conflict of interest now that he also wears two hats, serving as prime minister as well as being a UTN member, Gen Prayut said he has to prioritise and juggle the roles properly.

“As prime minister, I am responsible for taking care of people nationwide, following up on government projects and fixing problems,” he said. “As a party member, it is now about election campaigns. All I have to do is to define the roles clearly.”

PM’s Office Minister Thanakorn Wangboonkongchana on Tuesday confirmed that Gen Prayut would visit Chumphon as a UTN member and deliver a speech there.

He said the PM’s visit is in line with the election law and the Election Commission’s regulations as the prime minister takes a day off on Saturday.

The PPRP and the UTN Party are now involved in a tug-of-war over the ownership of the state welfare scheme, which is highly popular among grassroots voters, according to political analysts.

The PPRP on Jan 17 promised to raise the rates of monthly allowances for state welfare cardholders to 700 baht if it returns as the government after the next general election. But against that, PM’s Office Minister Thanakorn Wangboonkongchana claimed the scheme was Gen Prayut’s idea.