Prawit pats self on back for 1m views 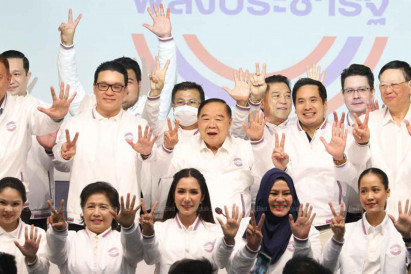 Deputy Prime Minister and leader of the Palang Pracharath Party, Prawit Wongsuwon (centre), poses with the party’s potential candidates for Bangkok and in other provinces at the PPRP’s head office on Tuesday. (Photo: Pattarapong Chatpattarasill)

Gen Prawit on Jan 13 turned to social media to speak his mind about the formation of the party following the 2014 military coup, saying the party was formed because Prime Minister Prayut Chan-o-cha expressed a desire to work in politics.

He said in the letter posted on Facebook that people were fully aware of the major political change in the country, which took place after the National Council for Peace and Order (NCPO) staged a coup on May 22, 2014.

At the time, the army, led by Gen Prayut, had to come out from the barracks to end the crisis that had been brewing for years and which had caused damage to the country’s economy and reputation, as well as undermining national security.

Gen Prayut formed a government and prepared to draft a new constitution after the coup. Gen Prawit said he accepted an invitation to join the government by taking the posts of deputy prime minister and defence minister to see the situation return to normalcy sooner.

Gen Prawit came out to post his letter after Gen Prayut made it clear on Jan 9 that he wanted to separate from the PPRP, which had supported him to be prime minister, to join the United Thai Nation Party, established as a backup party on his behalf.

Gen Prawit said on Wednesday in a second open letter on his Facebook that he thanked the media and people for paying attention to his first letter on Jan 13 — after he learnt that people had searched it on Google 800,000 times in the first day, reaching 1.5 million searches the following day.

“It is a first for me and the PPRP, drawing that much public attention online, as I want to be able to communicate effectively through social media and give the chance for everyone to fully express their opinions,” wrote Gen Prawit.

“I may be a beginner on social media, but I’m quite experienced in political affairs, and these last eight years have been precious to me.”