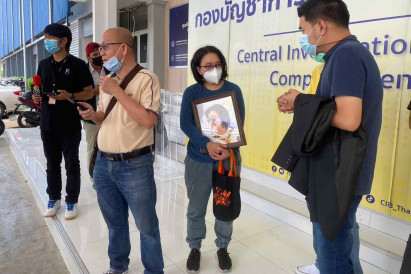 Dr Ura Tanworasetthee, second right, talks to a reporter at the Crime Suppression Division in Bangkok on Monday. (Photo supplied)

A doctor on Monday asked the Crime Suppression Division to investigate the death of her young sister, also a doctor, who she believes was murdered.

Ura Tanworasetthee, 49, went to the Central Investigation Bureau to ask the bureau’s CSD to look into the death of Urarat Benjaratanamanee, 39, a doctor at Karunvej Hospital in Pathum Thani province.

Urarat was found shot dead in a bedroom at her home in tambon Ban Krod of Bang Pa-in district in Ayutthaya on May 5, 2020.

Dr Ura, who works at Supamitr General Hospital in Ayutthaya, said she believed her sister was murdered because she had planned her future and was about to move to Betong district of Yala to escape years of conflict with a person close to her.

She asked the CSD to take over the case from local police, who had still not closed the investigation into her sister’s death.

Accompanying Dr Ura was anti-crime activist Achariya Ruangratanapong, who said that at the crime scene Urarat’s body was covered with a blanket and there was a gun on her left side. The dead doctor was right-handed and did not know how to use a gun, he said.

An autopsy at Thammasat University Hospital in Pathum Thani detected sleep medication in the woman’s body and concluded that a gun shot was fired through a pillow pressed against her body. The doctor responsible for the autopsy reported the possibility of both suicide and murder, Mr Achariya said.

Urarat had planned to take her mother to a clinic for kidney dialysis on the day she was found dead, Mr Achariya said.