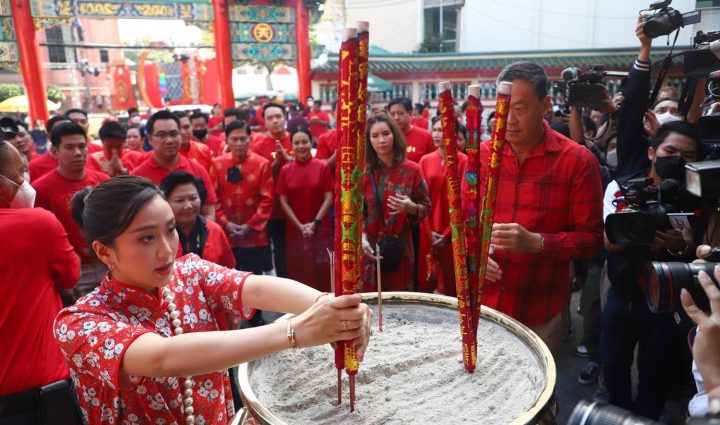 On the eve of Chinese New Year, the pair, widely speculated to be nominated as the party’s prime ministerial candidates, met business and community leaders to get first-hand information about their needs and expectations.

He said his area of focus was the economy, and information he gathered from the visit would be turned into policies to improve people’s livelihoods.

He declined to say if he was ready to become the party’s PM candidate, noting his task at hand was to enhance the party’s economic policy especially to reduce economic disparities.

He said he was not sure how often he could join Pheu Thai’s campaigns because he still works as chief of Sansiri. Asked if he would address party supporters at a rally, he said: “We’ll see.”

Among the business and community leaders present at the discussion on the development of Yaowarat was Jitti Tangsitpakdee, president of the Gold Traders Association.

Mr Jitti said Yaowarat, which is already one of the world’s top tourist destinations, still has business opportunities to offer.

Ms Paetongtarn told participants that political parties take economic development and people’s livelihoods seriously and that the development of Yawarat should be planned and gradual.

Mr Srettha said Yaowarat is a top tourist spot and changes need support from various parties such as the Ministry of Tourism and Sports and the Thai Hotels Association.

According to Ms Paetongtarn, moving telecom cables underground was one of the demands made by the community while food hawkers raised the possibility of their being allowed to do business on Mondays. Streetside vending takes a weekly break on Mondays for cleaning.

In other news, the Chartpattanakla Party on Saturday unveiled a second economic policy seeking to waive personal income tax for those whose monthly salary is below 40,000 baht.

Under the current tax structure, people who earn less than 26,000 baht will have zero income tax liability.

Chartpattanakla leader Korn Chatikavanij said the proposal is designed to help millions of office workers as the personal income tax structure has not been revised for several years despite the higher cost of living.

He said four million people would benefit from the tax policy. While two million would not have to pay tax, the other two million who earn more would pay less.

2023-01-21
Previous Post: Lunar New Year: How the world celebrated
Next Post: Commentary: Assigning grades to sugary drinks speaks to the Singaporean in me