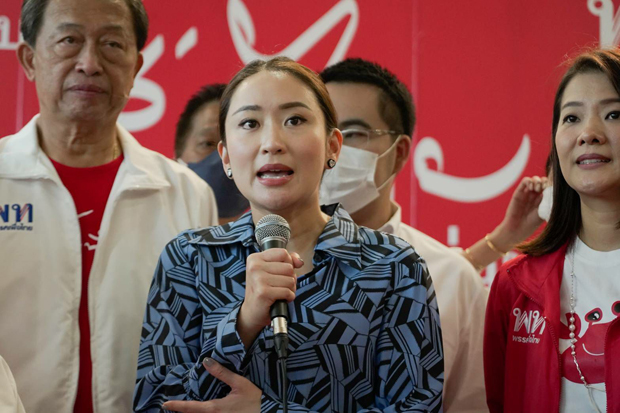 Paetongtarn Shinawatra needs her mother’s approval before standing as the Pheu Thai Party’s candidate for prime minister at the coming general election, her father says.

As Ms Paetongtarn keeps political watchers guessing whether she will run for the top job at Government House, her father and former prime minister, Thaksin, on Tuesday made it clear who would call the shots on this issue.

“If Ing [Paetongtarn] wants to be the prime minister, people have to elect her first. But before the people’s selection process comes, Ing must win the heart of her mother first,” Thaksin said.

Her mother, Potjaman na Pombejra, has not taken a public position on the matter to date.

Ms Paetongtarn, 36, is the de facto leader of Pheu Thai. Her official position is chief of the Pheu Thai family. The official party leader is Cholnan Srikaew.

Thaksin’s youngest daughter has publicly neither admitted nor denied her desire to be the party’s candidate for prime minister.

“She (Khunying Potjaman) probably doesn’t want her to do that, because of the boiling political climate,” Thaksin said. That Ms Paetongtarn has a young daughter to take care of could be another reason for Khunying Potjamarn to seriously consider, he added.

Pheu Thai is currently on a roadshow to garner votes. The senior opposition party hopes for a decisive win at the general election due by March, to prevent suspended Prime Minister Prayut Chan-o-cha prolonging his hold on administrative power.

The quarterly Nida Poll survey in June showed Ms Paetongtarn led other possible candidates for the prime ministership, with an approval rating of 25%, more than twice the rating of Gen Prayut, on 11%. The next quarterly poll is due at the end of this month.

Respondents in June said they favoured a younger leader to administer the country and supported Ms Paetongtarn because she was a sibling of Thaksin, among other reasons.

Respondents also said Gen Prayut’s biggest asset was being an honest leader, and the country needed a continuation of this policy.

2022-09-14
Previous Post: CNA Explains: What is a bivalent COVID-19 vaccine, and how will it protect me?
Next Post: China’s Xi arrives in Kazakhstan on first foreign trip since pandemic