Another cop fingered in VVIP police escort of Chinese tourist 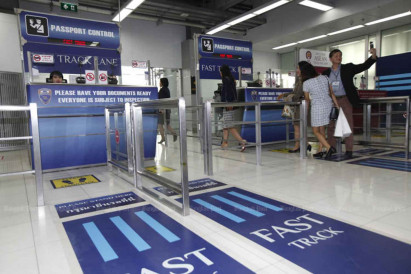 Police say another non-commissioned officer was involved in offering an unsanctioned police escort service through a tour operator to a Chinese tourist, who revealed the illicit VVIP service via social media.

The police senior sergeant major proposed the service to a tour operator he met at an event last November, Pol Maj Gen Atchayon said, without elaborating on the non-commissioned policeman.

To enact the controversial escort service, the police senior sergeant major had a tourist police captain meet the Chinese tourist at Suvarnabhumi airport. After picking up her luggage, the captain then ushered her through an immigration fast lane.

Once outside the airport, the police senior sergeant major had two traffic police sergeants escort the Chinese tourist in a motorcade from the airport to her hotel in Pattaya.

The two traffic policemen were charged with violating the Land Traffic Act and the Official Symbols Act.

A motorcycle and a car used in the motorcade were private vehicles but they were attached with sirens and the logos of the Royal Thai Police Office without permission, Pol Maj Gen Atchayon said.

Police would question the tour operator and the female Chinese tourist to support their investigation into the case, he said.

Police would also verify statements she made in her video clip and the claim that the policemen in the motorcade received 7,000 baht plus a 200-baht tip in the controversial service.

In addition, investigators would find out how long the group of policemen had provided the escort service and whether they should be prosecuted for wearing police uniforms while doing so.