‘We don’t like each other’: Rivals Canelo Álvarez and Gennady Golovkin face off in trilogy fight 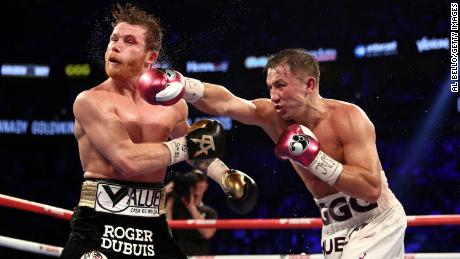 And after 24 bruising rounds in the ring together already, it’s perhaps no surprise.
But, after years of speculation, the two boxing greats will reignite their rivalry for the third and final time on Saturday in Las Vegas — with more on the line than just title belts.
When the pair touch gloves, their trilogy fight will have a personal aspect to it, with Álvarez telling CNN Sport’s Alex Thomas that it is “different” to his other fights.
“I think it’s different because we don’t like each other,” he explained. “We have history, so it’s a more exciting fight, for both, for the fans, for everybody.
“And I hate that kind of person, like Golovkin says a lot of things about you and then when you have that person in front of you, they say: ‘Oh, I respect this, I respect that.’ I hate that. I’m just really excited to get back.”

Álvarez and Golovkin’s rivalry has gripped the boxing world for almost five years, ever since their first bout, with ups and downs, thrills and spills along the way.
They first fought in 2017, with GGG’s WBC, WBA and IBO middleweight titles all on the line; the fight ending in a controversial draw with many saying the Kazakh fighter should have been ruled the victor.
The disputed result of the fight culminated in a rematch being announced swiftly after, only for it to be canceled after Álvarez tested positive for a banned substance. The Mexican fighter was banned for six months as a result.
Finally, just over a year after their first fight, the two fought in a rematch, which again wasn’t without controversy. Although Álvarez was awarded the win via a majority decision after 12 rounds, many again debated whether that result was accurate, once again saying Golovkin outboxed Álvarez.
And now, almost four years to the day since their second fight, the two will step into the ring again.
Álvarez will be putting his undisputed super-middleweight titles on the line, while for Golovkin, he will be fighting at the weight for the first time in his career.
The 40-year-old Golovkin is coming off a middleweight unification victory against Japan’s Ryōta Murata, his first fight in over a year.
But for Álvarez, it is a different story.
In his previous fight in May, the 32-year-old was stunned by Russia’s Dmitry Bivol in their light heavyweight title clash, with all three judges scoring in Bivol’s favor — just the second loss of his career.
It was a step up in weight for Álvarez, although he doesn’t blame that increase for the unanimous defeat, saying: “A lot of things happened in my training camp.”
However, that loss has only made him more dangerous as he says he “learned a lot” from it. “I think I’m more dangerous than before because I’m hungry to come back,” Álvarez said.
“And I’m very competitive. Like I said before, when you’re looking for greatness, it’s going to be hard times. But that’s not to say I’m not going to accomplish what I want, my goals. So I’m looking forward and I’m ready to come back.”
While his trilogy fight with GGG is the latest in a long series of blockbuster fights for Álvarez, he says — as he prepares for his 62nd professional fight — he is driven by more than just titles and championships.
“I always feel like the best fighter in the world, since I started boxing. I feel like the best because I’m the only fighter who doesn’t need to risk. I risk because I want to be a great, not just be a champion. There are a lot of champions out there. The difference between me and between them is I risk everything to be great.”
The fight can be watched live on DAZN PPV on September 17.
2022-09-16
Previous Post: England football great David Beckham spotted in The Queue for Queen Elizabeth II
Next Post: Kim Kardashian shares the type of guy she wants to date next