University of Oregon apologizes for ‘disgraceful chant’ at football game 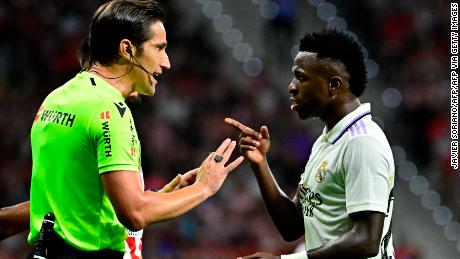 The university “sincerely apologizes for an offensive and disgraceful chant coming from the student section” during the game, it said in a statement on Twitter.
“These types of actions go against everything the university stands for, and it goes against the spirit of competition,” the statement said. “We can and will do better as a campus community that has no place for hate, bias or bigotry.”
Videos of the incident made by a BYU fan show Oregon fans chanting “”F**k the Mormons” repeatedly.
The student who shot the video — who did not want to be named — said she is a Mormon and is used to people making comments against Mormons, but asked, “When’s it gonna be time for Mormons to be included in religious acceptance?”
The chanting happened at least five times, she said.
“I wouldn’t say it made me emotional,” she told CNN. “It was just like in my head I’m like, ‘This, this is not right,’ and our society seems to still think it’s okay to make fun of Mormons and … I’m going to say something.”
On Saturday, Utah Gov. Spencer Cox (R) retweeted a clip of the incident, writing “Religious bigotry alive and celebrated in Oregon.”
The Oregon Pit Crew, a student-run Twitter account for the university’s student section, issued its own apology.
“We do not condone or support any hateful speech directed towards one’s religion and are ashamed of those who participated,” they wrote.
Oregon Gov. Kate Brown (D) condemned the chant as “unacceptable.”
“In Oregon, we strive to be a welcoming, inclusive state to all, regardless of race, religion, gender, or background. Our state and nation have an ugly history of discrimination and bigotry. The chant at yesterday’s Oregon-BYU game was unacceptable. We must do better,” she tweeted.
Gov. Cox retweeted each of the apologies with a heart emoji and a fist-bump emoji.
“We appreciate the sincere apology from the University of Oregon regarding the behavior of some fans at Autzen Stadium on Saturday,” said BYU in a statement. “We recognize that this isolated behavior does not reflect the values of the University of Oregon. As we all work together to address incidents that seek to divide us, we are grateful for those who are willing to come together to build bridges of understanding.”
Prior to the start of the game, the BYU team ran out of the tunnel with an Oregon flag featuring the name and number of Oregon player Spencer Webb, who died in July after suffering a head injury from a climbing accident.
BYU was founded in 1875 by the second president of the Mormon church, Brigham Young. The university is supported by the Church of Jesus Christ of Latter-day Saints, and nearly all its students are Mormon.
Saturday’s incident will be investigated, according to Kris Winter, Oregon’s interim vice president for the Division of Student Life.
“We call on our students and campus community to refuse to accept or tolerate this type of behavior,” she said in a statement.