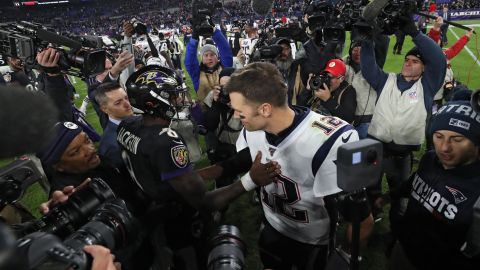 Tom Brady and Lamar Jackson may be 20 years apart in age, but both quarterbacks have a special bond.

When Brady originally retired in February – he would later unretire – he posted a message aimed at Jackson saying the Ravens superstar was “next,” suggesting he was Brady’s heir-apparent.

But this Thursday, the two will be on opposing teams as Jackson’s Baltimore Ravens travel to face Brady and the struggling Tampa Bay Buccaneers.

Ahead of the Thursday night clash, both were asked about their mutual respect for each other, with 2019 NFL Most Valuable Player Jackson calling Brady the “G.O.A.T.” – the greatest of all time.

“I really don’t,” Jackson said when asked if he gets excited to face Brady-led teams. “It’s [Tom] Brady. Who wants to play against Brady?

“But he the G.O.A.T., man. I’m always playing against the defense not the quarterback, so I’m going into every game the same way, same mentality. Just want to go out there and do what I’m supposed to do to win.”

When he was asked about the “you’re next” shout-out by Brady, Jackson said he hopes he can emulate a fraction of the success the future Hall-of-Famer has had in the game.

Brady himself said he believes Jackson has a “great future” ahead of him.

“He’s an amazing player and he challenges defenses. He has a really unique skillset,” Brady told the media. “His ability to improvise, make plays with his legs, extending plays – they do a good job with that offense.

“They have a good defense, they run the ball extremely well. He’s, obviously, very dangerous with the ball in his hands and they’ve got some weapons, too, so it’s a tough challenge for our defense. We’re going to have to play a real complementary game, play tough, hard-nosed football and try to get a win.

“I just think very highly of him.”

The Ravens and the Bucs are both teams that have had early season struggles – despite being thought of as Super Bowl contenders before the year.

Going up or down

Baltimore has been inconsistent so far, losing close encounters while also winning its fair share at the gun too.

The Ravens are a team that have changed over the seven weeks of the NFL season so far; transitioning from one with big passing plays from Jackson and a leaky defense to one focused on Jackson’s running ability and a more stout defense.

The Bucs are coming into Thursday’s encounter on the back of a two-game losing streak, and most recently, a worrying 21-3 loss to the lowly Carolina Panthers to send them to 3-4 on the year – though they are still leading the NFC South.

Between Brady’s off-field outbursts and a faltering offense, the Bucs’ title credentials are under scrutiny, with many suggesting Brady’s presumed final season might end in heartbreak rather than glory.

However, despite the poor run of form, Brady still believes his team has a chance to turn their season around.

“I think there’s always hope, and then there’s reality,” he told the media. “I think you really focus on what the reality of the situation is, and that’s we haven’t played our best football.

“So nothing in this game is given to you. You have to go earn everything and I think that’s the competitive nature of it. They’re good on the other side of the ball, too. We’ve just got to go find a way to get a win.”