Woman attacked by her male pitbull 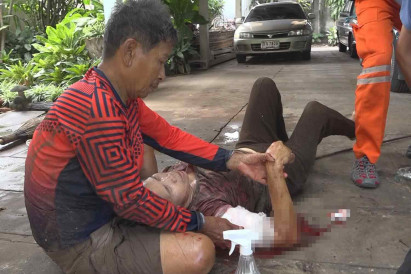 NAKHON RATCHASIMA: A woman was attacked and seriously injured on Monday by her male pitbull while she was feeding a stray dog.

The Hook 31 rescue unit received a telepone call for help about 2pm and a team rushed to a house on Soi Thakerngpol 5 in tambon Suranaree in Muang district.

They gave first-aid for Supaporn Wangjulklang, 60, before taking her to hospital.

Ms Supaporn had been attacked and bitten by her pitbull and had serious injuries to her neck and right arm, and bled profusely over the cement floor.

The dog was put back in its cage after the attack.

Ms Supaporn’s husband said they had raised the male pitbull, which they called Nazi, since it was a puppy. It was now six years old.

He said his wife was giving a stray dog known as “Khao” some sweets when she was unexpectedly attacked by Nazi, probably out of jealousy.

The dog’s bite had been so firm that he had to use an iron bar to pry open its mouth and free his wife, he said.