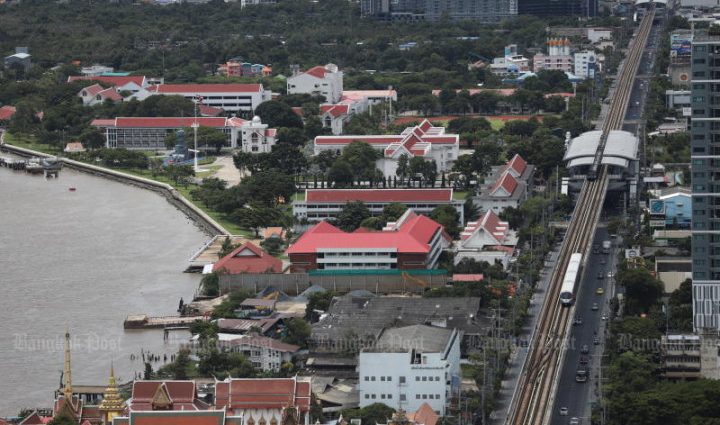 A bird’s eye view shows a train making its way in the BTS Green Series from Bearing to Samut Prakan which usually forms an extension of the Sukhumvit Line. (Photo: Wichan Charoenkiatpakul)

A consumer watchdog is urging the Bangkok Council to consider a proposal that could keep fares over the BTS Skytrain Green Line electric rail service low whilst resolving other problems surrounding the line’s concessions.

The first option would be to adopt a single fare of 15 baht per ride upon these sections, as the second is to set the starting cost at 14 baht and the fares will increase by two baht for every station travelled, she said.

The TCC urged the Bangkok Council to cost passengers a flat cost of 15 baht per ride to the two sections and cap fares in a maximum 44 baht per ride through the Green Line, mentioned Ms Saree.

The TCC also suggested how the Bangkok Metropolitan Administration (BMA) negotiate with all the Ministry of Financial about the possibility of transferring the 69. 1-billion-baht in debts sustained through building these two extensions as well as the right to operate them to possibly the ministry or the Mass Rapid Transportation Authority of Asia (MRTA), she said.

The particular TCC urged the particular BMA to adopt securitisation to convert the assets into securities in order to raise funds to pay off all other financial obligations incurred in the Eco-friendly Line project before the concession for working the main section of the queue expires in 2029, she said.

The BMA would then possess full control of the particular operation of all 59 Green Line channels, she said.

The TCC also suggested that this BMA propose that the cabinet to nullify order No 3/2562 of the now-defunct Nationwide Council for Serenity and Order (NCPO) that has allowed the particular concession to be extended from 2029 in order to 2059, she stated.

Selecting new concessionaires to operate the electric teach service and develop the train channels for commercial purposes will then be discussed, she said.

Ms Saree said the TCC would like the BMA to set up a working team to promote public involvement in making all types of public transport services within the city more accessible to all.