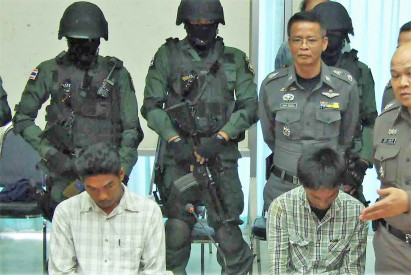 Pol Lt Gen Somchai Nitayabowornkul, standing second right, at a press conference on narcotics suppression in Chumphon province in 2013, when he was a deputy commissioner of Provincial Police Region 8. He rose to be the “unusually wealthy” commissioner. (File photo)

The Criminal Court for Corruption and Misconduct Cases has ordered the confiscation of 136-million-baht worth of assets from Pol Lt Gen Somchai Nitayabowornkul, a former deputy commissioner of Provincial Police Region 8, who was found to be unusually wealthy by the National Anti-Corruption Commission, NACC secretary-general Niwatchai Kasemmongkol said on Wednesday.

The office sent its investigation report to the Office of the Attorney General. The OAG forwarded the case to the Criminal Court for Corruption and Misconduct Cases.

On Aug 10, the Criminal Court for Corruption and Misconduct Cases Region 8 found Pol Lt Gen Somchai  guilty as charged. The court ordered Pol Lt Gen Somchai and his wife Kesinee and daughter Panisra, or Anchisak, to hand over ownership documents for assets worth 136,276,311 baht in total to the Finance Ministry for confiscation. The two women held assets acquired by Pol Lt Gen Somchai but registered in their names.

The assets in Mrs Kesinee’s name are – land with a house at Moo 7, tambon Hin Lek Fai in Hua Hin district, Prachuap Khiri Kan; 10 blocks of land in tambon Thap Tai, Hua Hin district; two blocks of land, each with a commercial building, in tambon Thap Tai; a comdominium room on the 7th floor of Viva Condo in Bangkok’s Khong San district; two savings accounts with the Chumphon police savings cooperative; 19.2 million baht worth of shares in the Chumphon police savings cooperative; and, the right to demand repayment of a 2.1 milliion baht debt from Noppadol Nitayakul, a debtor.

Pol Lt Gen Somchai’s assets in the name of Ms Panisra are – a room on the 20th floor of M Condo in Bangkok’s Chatuchak district and a Mazda 2 car.