Three killed in shoot-out in Narathiwat 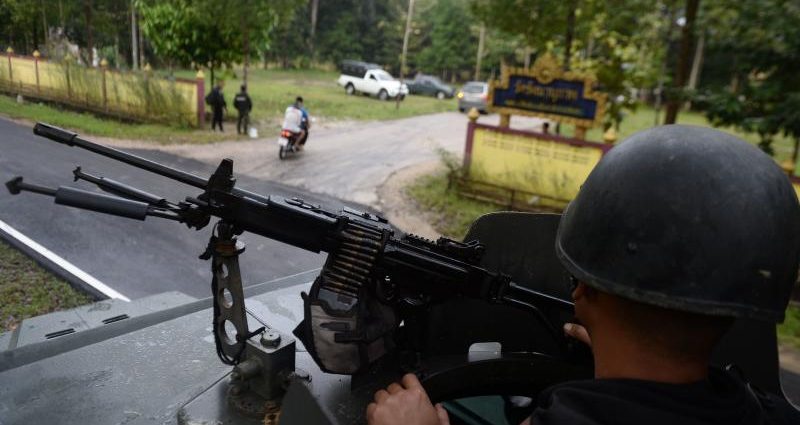 A soldier with an assault rifle takes position outside a Buddhist temple in Narathiwat province. (File photo: AFP)

NARATHIWAT: Three people were killed in a jungle shoot-out between government forces and separatist rebels in this southern border province of Narathiwat, police said Saturday.

Police and soldiers on Friday trekked up a mountain in Narathiwat, where they encountered an armed separatist group that began shooting, according to police.

“They started to shoot at us so we had to retaliate, which left three people dead,” local police chief Suthon Sukwiset told AFP, adding they were all Thai Muslims.

“We discovered three M16s in their possession and have confiscated them.”

No police or troops were killed or injured in the operation, which lasted at least five hours.

Thailand’s far south — heavily policed by security forces — is culturally distinct from the rest of the Buddhist-majority country, which colonised the area bordering Malaysia over a century ago.

Representatives of the Thai government and the Barisan Revolusi Nasional (BRN) rebel group met in Kuala Lumpur, Malaysia, last year for their first in-person peace talks in about two years, though no breakthrough was achieved.

A low-level conflict has simmered in the country’s southernmost provinces since 2004, killing more than 7,000 people, as rebels in the Muslim-majority region battle for greater autonomy from the state.