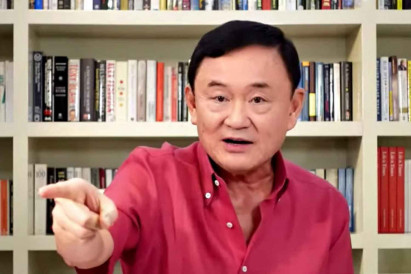 ‘Don’t talk about that man,’ he tells reporters

Apparently annoyed already by some previous questions about a range of topics from a new budget bill to a regular question about when he plans to dissolve the House for the next election, Gen Prayut suddenly walked away from the podium when asked to comment on Thaksin’s observation.

“Don’t talk about that man. I don’t like it,” said Gen Prayut as he left the podium and strode towards a waiting car.

He was speaking after chairing a meeting of the Police Commission at the Royal Thai Police headquarters.

The PM left without responding to a follow-up question about whether it really was his intention to procrastinate dissolving the House.

On Tuesday night, Thaksin made his remark about the UTN during a ClubHouse session in which he allowed his fans to ask whatever they wanted to know.

When asked when he would return home, Thaksin firmly said he would come back soon.

Referring to the conditions in which he might make his return, he said he would do so without having to wait for any parties to push to pass a new amnesty law for him.

Nor would he have to wait for the Palang Pracharath Party and Pheu Thai Party to form a political alliance to help him return home.

Thaksin fled the country in 2008 shortly before being sentenced by the Supreme Court’s Criminal Division for Holders of Political Positions to two years in prison for abusing his power as prime minister by assisting his then-wife, Khunying Potjaman, in the purchase of a prime plot of land at a heavy discount.

In January last year, the ex-premier talked on ClubHouse about his plan to end his self-imposed exile and return home in 2022. Thaksin on Tuesday night reiterated his intention to return to Thailand but said he had to delay his planned return from the end of last year because his children insisted he waits until he finishes oxygen treatment sessions.

“Ung Ing will be the one to announce when I will return to Thailand. No new [amnesty] law for me. No siding with Palang Pracharath either,” said Thaksin.

Ung Ing is the nickname of his youngest daughter Paetongtarn Shinawatra, who is Pheu Thai’s chief adviser on public participation and innovations.

“I will have to come home. I can no longer put up with the unfair treatment I have been dealing with [over the past years living in exile],” he said. He was presumably referring to criticism of him by politicians in Thailand.

In response to a question on the prospects of the Pheu Thai and Move Forward parties forming the next government after the polls, Thaksin only said he believed the so-called “democracy” parties would win.

In Bangkok alone, these two parties would each grab about half the total number of House seats, while altogether, they could pull more than 350 seats.

In another development, Sawaeng Boonmee, secretary-general of the Election Commission (EC), said the election regulator has finished drafting all regulations required for organising the election while still waiting for the organic law on elections to be endorsed.

The final parliamentary session is due to end on March 23, and the election is expected to be held on May 7 if the House is allowed to run its course, said Mr Sawaeng.

So, the EC will have 25 days to spare to rearrange constituencies for the new election, a lengthy process that will involve public hearings on the new constituencies demarcated, he said. “So, if the House is suddenly dissolved now, there won’t be [enough time for rearranging] constituencies. And there actually won’t be any elections as there is no election law yet,” he said.

Sometime within the 45 days before March 23, or by early February, would be good timing for a poll if an early House dissolution is to be called, he said.

On Dec 20, Deputy Prime Minister Wissanu Krea-ngam said Gen Prayut on Dec 16 submitted both the draft organic law on elections and on political parties to His Majesty the King for royal endorsement. The King has 90 days to decide on these bills, said Mr Wissanu.

2023-01-25
Previous Post: Why Bhutan, the happiest country on earth, is worth paying US$200 a day for
Next Post: Princess brings designers to local weavers