Retired F-22s should go to Japan, not the boneyard 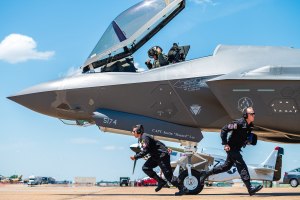 The Pentagon wants to retire dozens of F-22s rather than upgrade them, with the Department of Defense saying it can use the US$1 billion or so saved to upgrade its forces elsewhere.

But these F-22s are very important and sending them into retirement when they can be a very effective deterrent for others is potentially a major mistake. Japan (like Israel) has long wanted F-22s, which can play a major deterrent role in the Pacific and challenge almost anything China throws at them.

If they are removed from service, these two dozen F-22s will go to the boneyard at the Davis-Monthan Air Force Base in Tucson, Arizona. There, they will slowly rot in the sun and some of their parts may be scavenged by the Air Force.

The F-22 is a very capable and very expensive airplane. Brand new, the flyaway cost was $120 million when the first aircraft entered service in 2005. Translated into current dollars, the cost for a new one would be $182 million.

But the per plane cost also should include research and development, which would bring the 2005 cost to $334 million, or $507 million in 2022 dollars.

Calculated that way, the value of the two dozen F-22 aircraft the Air Force wants to retire is around $12.2 billion – assuming they were in good shape, which they are not.

The Air Force has admitted that the cost of upgrading all the F-22s planned for retirement would be just shy of $1 billion, a fraction of the investment so far.

Only the US has the F-22 and it remains a crucially important air superiority fighter.

The F-22 has a number of advantages compared with the cheaper, more tactical F-35. For starters, the F-22 has a smaller radar cross-section than the F-35, which sometimes is referred to as semi-stealthy. Moreover, the F-22:

Where the F-22 is not as modern makes for a shorter list:

But by far the most important feature of the F-22 is that it can knock out enemy air defenses and radars, as well as win in air-to-air combat, clearing the way for non-stealth fighters, fighter bombers and conventional bombers to take out enemy assets such as missile launch sites and command centers.

The F-22 is clearly the envy of the Chinese military and China would be hard-pressed to beat off an attack by F-22s.

So the question arises: Why not upgrade the F-22s proposed for retirement and offer them to America’s allies, especially Japan? The full-time presence of F-22s on Japanese territory would make China think twice about its chance to win if, for example, a conflict broke out over Taiwan or the Senkaku islands.

One possible barrier is a 1999 law that said the US was not allowed to develop an export version of the F-22. Of course, the F-22 is already developed and the upgrades would be the same as for the F-22s in the fleet. Even so, the 1999 law is often interpreted as a presumption against any export of the jet.

Originally, that 1999 rider to US defense legislation was to keep our adversaries from getting their hands on the F-22 and exploiting its technology. But China has already stolen all the relevant plans for the F-22. Even so, the Chinese probably still lack technology that would be critical to really competing with the F-22.

Their best try is the Chengdu J-20, which is now deployed but also remains a work in progress. Whatever we really know about it is classified, but most experts say that J-20 engines, among other components, are not nearly as good as the Pratt and Whitney F119 engines on the F-22.

Currently, the J-20 uses Shenyang Lining WS-10C engines, and there is a plan to upgrade to a new engine, the Xian WS-15. But little is known about the reliability of the Chinese engines, or even if they perform as advertised.

In any case, even if the J-20 was as good as the F-22, if US-made F-22s are not in the region it will be a challenge for Japan to stay in the fight. Either the US will have to deploy its own F-22s at all times in Japan, or give Tokyo the ability to match the Chinese by providing F-22s.

For very little money, Japan – if it got the F-22s that are otherwise headed to the scrap heap – would have an equalizer in the region, one of considerable strategic significance.

The US and its allies today are being challenged by China and maintaining the balance of power is proving more and more difficult. A simple amendment to US legislation would enable Japan to get the retired F-22s, assuming, of course, the Japanese want them.

Since they wanted them before, now is the right time for the Japanese to ask for them again.

2022-09-15
Previous Post: Two CNB officers found to have engaged in conspiracy to swap urine sample of suspected drug offender
Next Post: Man gets life imprisonment and caning for murdering fellow jogger in Punggol during ‘circuit breaker’