Referendum on charter still on table 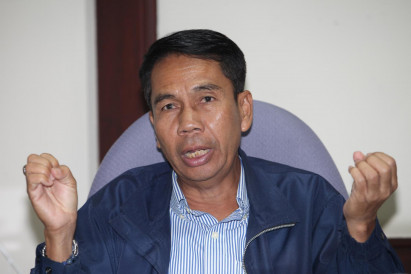 Motion calling for rewrite ‘not dropped’

The opposition-sponsored motion seeking a referendum within the charter rewrite continues to be intact and can be tabled for an election after parliament convenes in November, stated chief opposition mix Sutin Klungsang.

Mr Sutin said the motion, which was proposed simply by two opposition MPs and put up for a vote on Thurs, was not considered to are dropped after the conference was brought to a good abrupt end.

The movement involves asking the federal government to hold an open public referendum on the charter rewrite with a suggestion that the proposed plebiscite be held on the day the next general selection takes place, which is anticipated early next year.

After a debate in which most MPs agreed with the motion, a vote was taken.

A total of 230 MPs voted with 217 voting within favour with six against and seven abstentions.

Deputy House loudspeaker Supachai Phosu announced the motion have been successfully passed, however, many MPs expressed concerns that only 230 MPs decided to take part in the vote and the number was lacking the regular meeting quorum.

When the meeting kicked off, a total of 242 MPs were present; however , it required 236 to meet the particular quorum.

They said the movement could run into legal problems later plus suggested that the conference should be adjourned as well as the motion postponed until a later date.

Mr Supachai failed to make a ruling and declared the conference adjourned.

This raised the question of whether the motion had ultimately already been dropped.

Mr Sutin stated yesterday the movement remains intact and can be put up for a vote in the next parliamentary session sometime within November. The current session ends tomorrow.

Several MPs spoke in favour of the particular motion and pointed out that the 2017 rental was designed in a way that produced amendments extremely difficult.

They said it featured multiple conditions including that at least one-quarter of all senators, or 84, must vote for the charter amendment bill for it to be legitimate.

Veerakorn Kamprakob, an MEGAPIXEL for Nakhon Sawan from the Palang Pracharath Party (PPRP), mentioned the current charter is usually riddled with flaws as well as a new one needs to become written.

He said a single major flaw is really a provisional clause which allows the military-appointed Senate to join MPs in selecting the prime minister.

“I’ve said since it has been promulgated that the charter is not fair and does not put the people 1st, ” said Mr Veerakorn.

The 2017 rental was adopted within an August 2016 referendum.