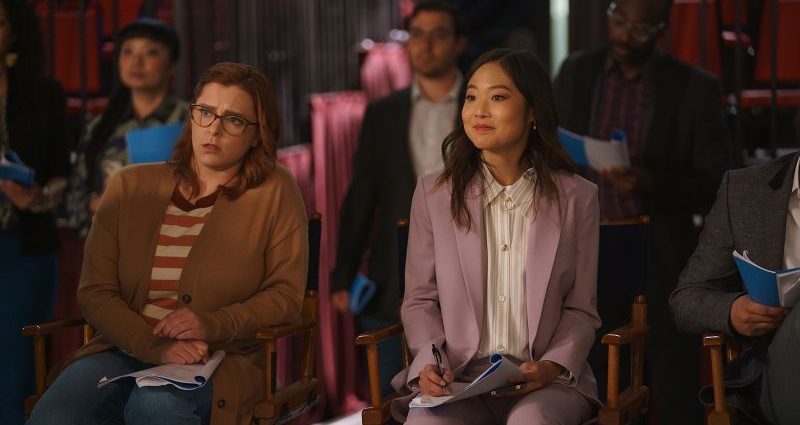 The meta aspects of a Hulu comedy about the making of a Hulu comedy quickly pile up in “Reboot,” a fictional show about reviving a series from the early 2000s, reuniting the cast and crew with all their insecurities and old grudges. Created by “Modern Family’s” Steve Levitan, it’s a breezy and very-inside look at Hollywood, with a few too many rim shots but still a fair amount of laughs.

Network suits at Hulu (that is, the show’s fictional version of it) are a bit confused when a hot indie film writer, Hannah (“Crazy Ex-girlfriend’s” Rachel Bloom), comes in to pitch a reboot of something called “Step Right Up!” Instead of some original idea, why would she want to give an old “Who’s the Boss?”-esque sitcom a more artistic makeover?

She has her reasons, and finds the cast perhaps not surprisingly eager to reprise their roles, mostly for those sweet paychecks. Yet she’s horrified when the package comes to include the original producer, Gordon (Paul Reiser, stealing scenes right and left), the proverbial bull in a china shop with very different ideas about how his baby should be treated.

Among the cast, there’s romantic history between Reed (Keegan-Michael Key, in an improvement upon his last showbiz satire, the movie-about-a-movie “The Bubble”) and Bree (Judy Greer); a sordid past for stand-up-turned-actor Clay (Johnny Knoxville); and a host of issues regarding now-grown-up child star Zach (Calum Worthy), starting with the fact his mom still insists on hanging out around the set.

Levitan gets ample mileage out of the clash between old and new, with the dinosaurs that Gordon hires for the writing staff constantly saying non-HR-friendly things to Hannah’s younger, more diverse additions. Plus, the network has insisted on casting a reality-TV star (“The Sex Lives of College Girls’” Alyah Chanelle Scott) whose social-media following is much better developed than her acting skills, which explains why she keeps reading the stage directions as if they were dialogue.

Some of the jokes are a bit too obvious, such as the network’s youthfully earnest VP of comedy (Krista Marie Yu) saying, “I’m new to humor.” Others can be almost painfully inside baseball, unless of course you can relate to resenting sitcom heavyweight Chuck Lorre for producing so many shows that he squeezes out other creators.

Then again, that’s part of the latitude that streaming allows, and other elements, like the inter-generational conflict, prove frequently funny, and occasionally a little bit sweet. (Yes, the “Seinfeld” “No hugging, no learning” rule is sometimes violated, though seldom for long.)

Levitan actually created a series about a sitcom 20 years ago for Fox (“Greg the Bunny,” we hardly knew ye), so give him credit for giving the underlying concept another try in what should be a more hospitable time and place.

“Reboot’s” first season is a brisk eight episodes, and it seems to leave plenty of room for more hurt feelings and hijinks to come. And if it works, who knows? In 25 or 30 years, there might even be a “Reboot” reboot.

2022-09-20
Previous Post: Covid to be excluded from banned diseases for visitors
Next Post: Marcos hat in hand in US while keeping China close