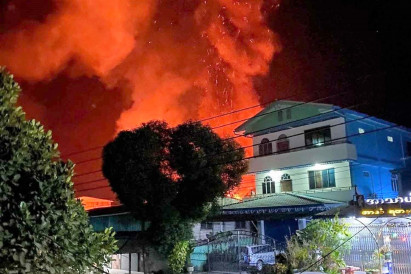 Flames light up thick smoke billowing above Myanmar’s Payathonzu township, clearly visible from the Thai side of the border in Kanchanaburi’s Sangkhla Buri district, during the attack on Monday night. (Photo: Piyarach Chongcharoen)

Arsonists’ targets included the town office and military transport and communications facilities. Sporadic gunfire and explosions could also be heard from across the border.

The fires started around 10pm and were clearly visible from the Thai side of the border.

Payathonzu, a town in the Karen State of South Myanmar, is only 800 metres from Nong Lu village in Sangkhla Buri district, where Three Pagodas Pas is located.

There were no immediate reports of damage or casualties from the fighting.

Suthiporn Siwawetpikul, the Sangkhla Buri district chief, ordered the deployment of territorial defence volunteers at Three Pagodas Pass to keep a watch on the situation.

Col Thatdet Abuarat, deputy commander of the Lat Ya Task Force, ordered patrols along the border to ensure security.

Preparations were also made to provide humanitarian assistance for people who might flee across the border to escape the fighting.

2023-01-24
Previous Post: With Hong Kong running out of space for its trash, residents are doing more to reduce food waste
Next Post: This Mumbai atelier is the secret workshop of top French fashion houses