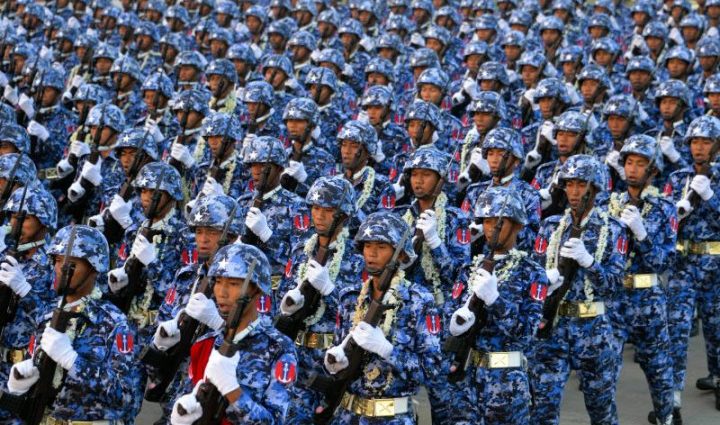 Myanmar soldiers march in a formation during a parade to mark the country’s 74th Armed Forces Day in Naypyidaw, March 27, 2019. A Myanmar tycoon suspected of drug trafficking and linked to the upper echelons of Myanmar’s ruling military junta has been arrested in Bangkok.

Authorities said on Wednesday they had detained a Myanmar tycoon suspected of drug trafficking, who three sources said was linked to the upper echelons of Myanmar’s ruling military junta.

“Police are in the process of asking the court for pre-trial detention,” Pol Col Kissana told Reuters by phone.

Three sources with knowledge of the matter told Reuters that Tun Min Latt, who has business interests in hotels, energy and mining, is a close associate of Myanmar junta leader Min Aung Hlaing and has procured supplies for the military.

British authorities sanctioned one of Tun Min Latt’s businesses in August in what they called an “effort to limit the military’s access to arms and revenue”.

Myanmar state media have published pictures of Tun Min Latt with the junta leader, including at an arms fair in Bangkok in 2019.

A 2019 UN document says Tun Min Latt is the son of a retired Myanmar lieutenant colonel and that a company he part-owns had made donations amounting to about $71,500 to the Myanmar military in 2017.

Reuters’ requests for comment from Tun Min Latt and his companies were not answered. Calls to a Myanmar military spokesperson also went unanswered.

In a statement, Kissana later said the police anti-drugs unit had asked a court to extend the suspects’ detention to gather more evidence and investigate the network. He said police also confiscated assets worth over 200 million baht from the four suspects.

Myanmar’s military seized power from the democratically elected government led by Aung San Suu Kyi in February 2021, and has since sought to consolidate power through a deadly crackdown on opposition.

A source with knowledge of Tun Min Latt’s case – who asked not to be named because they were not authorised to speak to media – said his arrest is part of a broader Thai crackdown on money laundering from narcotics in the border town of Tachileik in Myanmar’s Shan state.

The government’s Office of the Narcotics Control Board declined comment.