Malaysia ranks No. 7 in the world for most tweets on Korean content in 2022

Korean content – be it K-drama, films or music – is going from strength to strength globally.

One just needs to look at Twitter to see the amount of chatter K-content generates.

While K-content still reigns supreme in the Asian region, Western countries in Europe and North America have joined in on the Hallyu craze, according to a study by Twitter.

Seven out of the top 10 countries which tweeted most about Korean content in 2022 are from Asia, with Malaysia in seventh place. The other Asian nations in the top 10 are South Korea (#1), Thailand, Philippines, Indonesia, India and Japan.

Twitter highlighted that countries such as the United States, Brazil, Britain, Mexico, Canada, France, Spain, Italy, Turkey, Germany, and Peru are joining in K-content-related conversations too.

“K-pop communities on Twitter are passionate and we’re now seeing that strong culture of fandom growing and including a wide variety of K-content,” Kim YeonJeong, Twitter’s head of Global K-pop & K-content, said

“Fans from around the world are leading the globalisation of K-content by joining in related conversations on Twitter in real time. Wherever you are, whatever you’re watching, people are able to talk about it on Twitter,” Kim said at a presentation at the Content Marketing Summit 2022 in Seoul last month. 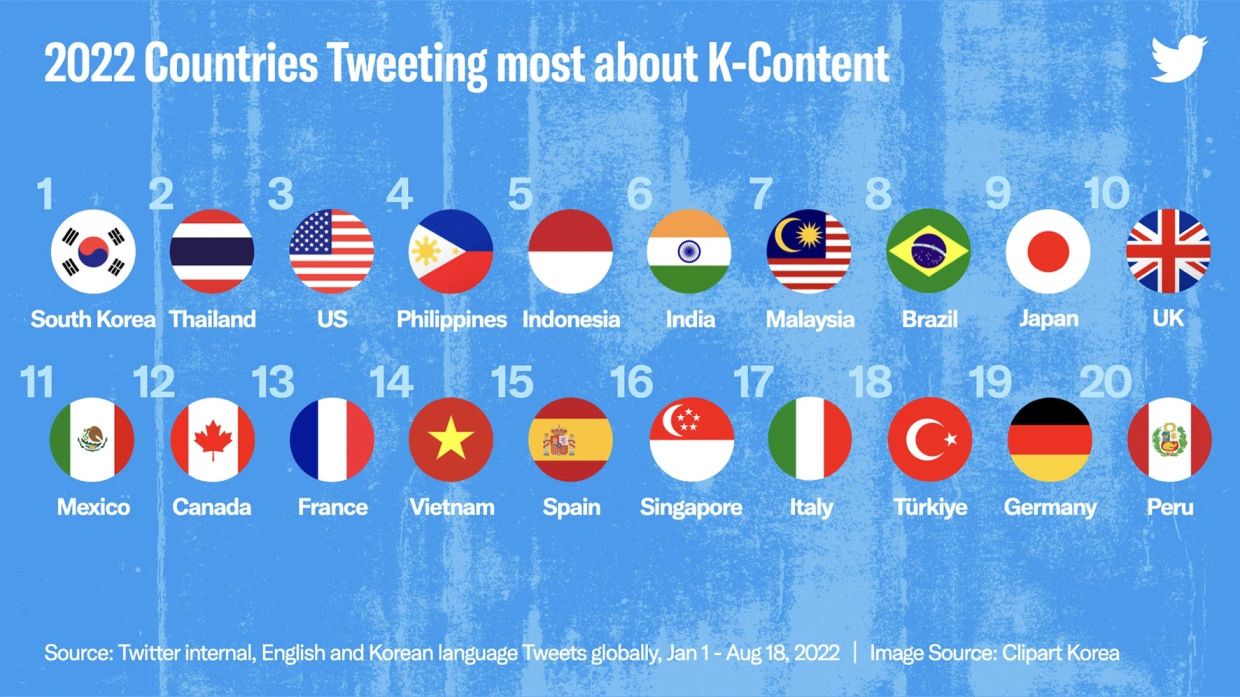 She added that with many K-pop idols crossing-over to star in K-dramas and films in recent years, it has helped to drive interest in K-content.

She gave examples such as Kim Sejeong in Business Proposal, Lee Jun-ho in The Red Sleeve, IU in Broker, Ok Taecyeon in Hansan: Rising Dragon that led a surge in tweets among fans.

It is no surprise, then, that the most-tweeted K-drama on the social media platform this year is Snowdrop which stars Blackpink member Jisoo.

Rounding up the top five are Twenty Five Twenty One, Business Proposal, All Of Us Are Dead and Our Beloved Summer.

2022-09-15
Previous Post: Be careful what you wish for in Russia’s defeat in Ukraine
Next Post: Sarawakian author lands deal with international publisher