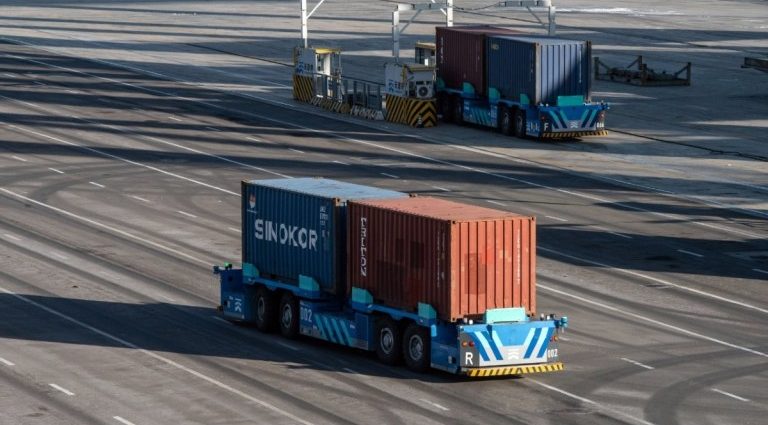 Huawei Technologies, a Shenzhen-based telecommunication equipment maker, has successfully achieved zero carbon emissions in a Tianjin port with the use of its 5G technology and the BeiDou navigation satellite system.

The company said it had turned the Section C Terminal in the Beijiang Port Area of the Port of Tianjin into the world’s first zero-carbon port terminal. It said it hoped this project could be a showcase for the green ports worldwide.

Dozens of companies have contributed to this project, according to Huawei. Among them, ABB Ltd, a Swedish-Swiss robotics firm, supplied the main remote control system. Several auto firms provided the unmanned vehicles.

“It is less difficult to apply the autonomous driving technology in closed and low-speed environments, such as mines and logistics parks, than on public roads,” Yue said. “In fact, unmanned logistic systems can be used to transport materials in many scenarios.”

He said Huawei would achieve long-term returns in this area as the global demand for unmanned vehicles and smart ports would keep growing in the coming decades.

Level 4 autonomy does not require a driver in the vehicle, which is programmed to stop itself if an accident happens. It is mainly applied in an area with a speed limit, such as 30 miles per hour.

Since a trade and technology war broke out between the United States and China in 2018, Huawei has faced several rounds of sanctions from the US. As it was banned from buying high-end chips from the US, it had to cut its own smartphone outputs and sell off its Honor brand.

In September 2020, TSMC stopped producing Kirin chips for Huawei, resulting in a countdown for HiSilicon’s chip inventory. In the third quarter of last year, Huawei reportedly depleted all of its chip inventory with its global smartphone chipset market share falling to zero. Huawei’s 5G technology was banned by the United States and by some countries in Europe and North America.

In recent years, Huawei has diversified its business to smart ports and mines. After setting up its Coal Mine Corps in January 2021, the company established four more – namely the Seaport, Smart Highway, Data Center Energy and Smart Photovoltaic Corps – in October of the same year.

Huawei’s Seaport Corps formed a joint innovation body with Tianjin Port Group and other partners to overcome the challenges faced by the “smart green” port field. It aims to provide a “China solution” for the construction of smart green ports worldwide.

On January 16 this year, Tianjin Port Group and Huawei announced that they would deepen cooperation by building a digital twin of the port and making it more automated and intelligent with 5G and L4 autonomous driving technologies.

“These innovations being used at the Port of Tianjin are having a huge impact on the port industry, creating new value for ports by improving operating environments, driving green and low-carbon development, and increasing operational efficiency,” said Yang Jiemin, vice president of Tianjin Port Group.

Yang said there were less than 200 workers in this automated port, compared with 800 and 1,000 workers in a traditional port of the same size.

Last year, the Tianjin port’s container throughput exceeded 21 million TEUs, ranking among the top 10 ports worldwide. The port boasts 300,000-ton-class terminals with a channel depth of 22 meters and has 213 berths of various types.

Yue said Huawei was good at providing information and communications technology (ICT) products and solutions. He said the company mainly contributed its 5G and cloud technology, road sensors and mobile data center (MDC) for driverless cars to the smart port in Tianjin.

He added that the Tianjin port used an AI-based intelligent horizontal transportation management system to plan the vehicle’s routes in order to minimize power consumption. He said the system also helped improve driving safety in the dock.