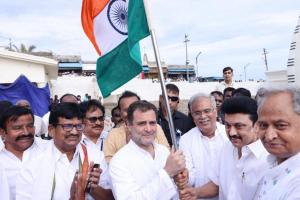 According to an old proverb, it is extremely simple to break a piece of wood but much harder to break a bundle constructed of them. With the 2024 parliamentary election firmly in its sights, key opposition parties across India are appearing to make plans on how to defeat Prime Minister Narendra Modi and his ruling Bharatiya Janata Party (BJP).

The political development in Bihar has left the political field wide open for 2024. The road is not going to be smooth for the ruling BJP. What happened in Bihar was a sheer masterstroke by the Opposition parties. The decision of Chief Minister Nitish Kumar to break the alliance with the BJP and form the government with the help of seven opposition parties – in a “Grand Alliance” – came as a major blow to the BJP’s Plans for 2024.

In a previous article, I talked in detail about the ramifications of Bihar’s development in national politics. It certainly provided a strong message to Indian voters that there is a credible political alternative available in Indian democracy.

What’s happened in Bihar could be repeated at the national level. From last month, there’s been a lot of political development across the opposition parties in India.

The march is being claimed by the party as the longest rally mounted in the country over the last century. Urging everyone to participate, Congress last week stated that the rally is meant to provide an alternative to the ‘” politics of fear, bigotry, and prejudice” and to the economics of livelihood destruction, increasing unemployment, and growing inequalities.

The foot march began in Kanyakumari on September 7 and will culminate in Jammu. The march will cover 12 states and two union territories. It will be about 3,500 km long and will be completed in about 150 days.

Similarly, as part of his plans to unite the opposition ahead of the 2024 parliamentary elections, Bihar chief minister Nitish Kumar was on three visit day to New Delhi in the first week of September to meet senior leaders of various regional political parties. He is currently heading the Grand Alliance, a seven-party coalition that includes Congress and the Left parties.

Most analysts are seeing it as a Nitish pitch for the PM position in 2024, a claim which is completely denied by him. But to defeat the BJP is going to be a herculean task. The opposition needs a strong vision, the right strategy, proper implementation, better communication and coordination among the allies. Congress must take the sole responsibility to revive coalition-based politics for the betterment of the nation and to revive its political fortune.

Congress first needs to understand that it’s the party’s legacy that is at stake rather than those of regional parties. So, the maximum number of contributions and sacrifices must come from Congress itself.

The party must take the position of big brother and guiding force to protect India’s pluralistic ethos as it did in the 2004 and 2009 general elections. The revival of the Congress and Grand alliance solely depends upon understanding among the key partners on policies, programs and strategy. But before that, the opposition must agree on a proper vision document to present to the nation.

Since elections are fought on vision, the opposition needs a strong vision. The BJP vision document will focus on making India into a completely Hindu nation.

The opposition or Grand Alliance vision document must emphasize inclusive growth for all sections of society, as against the BJP’s narrow and communal nationalism that denies equality and equal rights to a large section of society – mainly Other Backward Classes (OBC), Dalits, minorities, and the weaker section of Hindus.

It must highlight the atrocities committed by the BJP in the last ten years on the common people – especially poor Hindus, by diverting their reservation rights, imposing high taxes, and reducing institutional autonomy. The Grand Alliance must focus on communicating to members of the middle class how the BJP has fooled them in the name of nationalism over the years. It also must highlght the core issues of the middle class such as unemployment, high taxes, inflation, and increasing education cost.

The vision document must focus on the introduction of a new policy for doubling middle-class incomes in the next five years and tripling the income of the poor, especially people from the Economically Weaker Section, OBC, Dalits, and minorities. A strong middle class will only strengthen India’s future or India’s economy – as opposed to BJP policy, which is helping to make a country for few billionaires whose wealth has seen an exponential increase.

The vision paper also needs to emphasize the importance of policies and initiatives aimed at addressing regional problems, such as the economic marginalization of the Northern Indian States and the inadequate political representation of South India at the federal level. However, the vision paper won’t be much help if it lacks an appropriate strategy and effective communication techniques.

Every election comes down to who is a better communicator. To effectively communicate, the first exercise is to undertake “stakeholder mapping” – that is, careful identification and the selection of the target voter, followed by focused messaging through the right communications medium. Neewded is a meticulous approach to understanding the voter’s issue and engaging them at the local level.

Opposition leaders’ speeches must be perfectly drafted to cater to the happy-ending formula, build a story with the BJP as villain and depict the Grand Alliance as the underdog hero with the potential to overcome the adversaries. A coordination team must effectively handle the press briefings and pinpoint on a daily basis the fallout from the BJP on key issues.

The leaders also must effectively communicate that the Grand Alliance is the only force capable of shifting the national discourse from the politics of hate toward development or issue-based politics.

On the rest of the seats, it will consolidate the votes for coalition partners. But first, it should focus on renewing its fortunes in South India, with Rahul Gandhi as a prime face. The popularity and acceptability of Rahul Gandhi are greater in south India compared with North India.

According to an opinion conducted by C Voter last year, Rahul Gandhi is leading Modi in the popularity contest in two key south Indian states, Tamil Nadu and Kerala. With 57.92 percent and 43.46 percent, people in Kerala and Tamil Nadu prefer Mr. Gandhi as PM of India while Mr. Modi got only 36.19 and 28.16 percent.

In North and Central India, Congress needs to support the charismatic populist leaders of regional parties such as Nitish Kumar in Bihar, Akhilesh Yadav in Uttar Pradesh, Sharad Pawar in Maharashtra and Mamta Banerjee in Bengal, who have considerable dominance in their state politics with which to counter BJP influence.

This will also give a symbolic message to the voters at large that Congress stands for the unity of India asnd firmly believes in the politics of inclusion.

But choosing the right strategy without communicating effectively would not advance Grand Alliance prospects. So, rather than focusing on conducting large rallies, Congress and Grand alliance leaders should focus on door-to-door campaigns. It will help in bringing much-needed credibility to the opposition.

A message must be delivered to voters that the notions of a politics of elitism created by the BJP against Congress and its partner don’t hold any ground. It will help in creating the right perception, gaining crucial public support and more effectively communicating the electoral promise. A balanced and pragmatic approach with a little bit of caution and less enthusiasm will help the Grand Alliance achieve its objective in 2024.