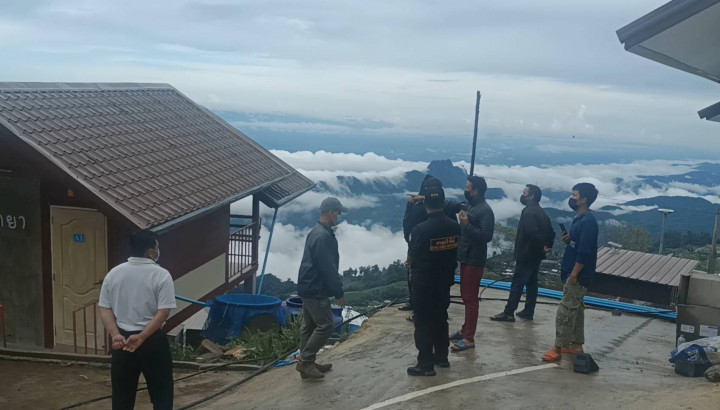 Officials inspect a resort hotel on Phu Thap Boek in Lom Kao district, Phetchabun, on Monday, when they were blocked from leaving the mountain for hours. (Photo: Sunthorn Kongvarakhom)

PHETCHABUN: Local forestry officials on Wednesday asked police to take legal action against the Hmong people who blocked them from exiting a resort hotel that allegedly encroached on Phu Thap Boek mountain – while authorities questioned why they had previously turned a blind eye to the matter.

A group of local officials at the Royal Forest Department filed the complaint at the Lom Kao police station seeking legal action against a group of people who prevented them from leaving a resort hotel on the mountain after they completed a survey there.

The incident happened on Monday when forestry, administrative, internal security and social development officials were about to inspect 12 new resort hotels that allegedly encroached on forestland on Phu Thap Boek in tambon Ban Noen of Lom Kao district.

The officials said a number of locals parked three pickup trucks to block their exit from a resort hotel on Phu Thap Boek at about 2.40pm. They tried to negotiate for their freedom but to no avail until 10pm, when the blockade was lifted. Several cars carrying tourists were also hemmed in.

Last week Phetchabun governor Krit Khongmuang said local forestry authorities had previously told him that there was no encroachment on Phu Thap Boek, but an investigation came to the opposite conclusion.

The governor then ordered legal action against the alleged encroachment.

Current forest officials were lenient and let many new resort hotels be built there, he said.