Flood-hit parts of Bangkok to be declared disaster zones 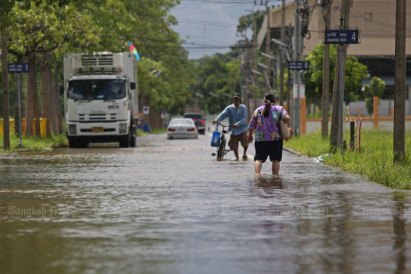 Residents of Thubyao sub-district in Lat Krabang district of Bangkok make their way along a flooded road. It is one of the six tambons in the city that will be declared disaster areas. (Photo: Varuth Hirunyatheb)

It was a rare announcement for the capital city, but officials were quick to say it was no cause for alarm.

Ms Tavida said the announcement would enable quick access to emergency relief funds and other aid programmes from the Disaster Prevention and Mitigation Department, an agency under the Interior Ministry.

She said residents of Bangkok should not be panicked by the announcement, to be made by Governor Chadchart Sittipunt. Its goal was to make them eligible for financial and other assistance.

At least 20,000 residents and 1,322 rai of farmland in the six sub-districts have been damaged by flooding following the heavy and continuous rain in the capital. Worst-hit were eastern and northern districts, including Lat Krabang.

Lat Krabang district had suffered most from the heavy rain. Work crews were draining floodwater into canals which flow into the Chao Phraya or Bang Pakong rivers.

City clerk Kajit Chatchawanich said all districts would dry out if there is no more rain over the next seven days.

This hope seemed to be dashed by weather forecasters. The Meteorological Department said there is at  least a 60% chance of rain in the city until next Wednesday.

The Disaster Prevention and Mitigation Department urged authorities and volunteers in 30 provinces in the northern, northeastern and central regions to stay vigilant until next Tuesday, as there could be sudden floods due to rain forecast to fall from Saturday.

It said areas in 13 provinces were still under water, although the levels were dropping.