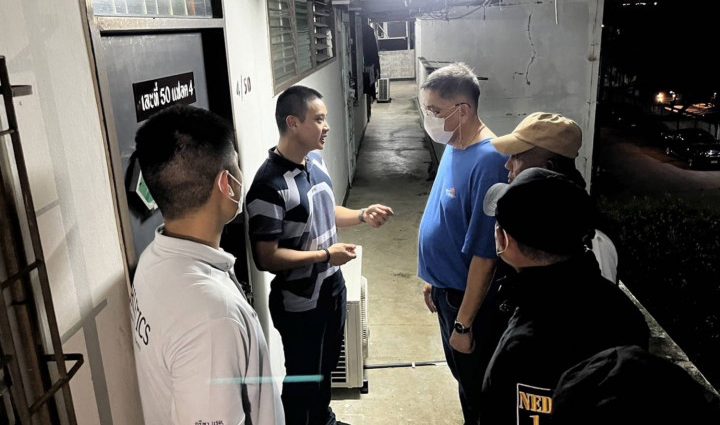 A former senior police officer who had been imprisoned twice has been arrested in Bangkok in connection with fraud at a gold shop and a currency exchange.

Mr Thana, formerly known as Pol Lt Col Khanchit Taengjui when he served as deputy traffic chief at the Bang Rak police station, was wanted on an arrest warrant issued by the Mukdahan Provincial Court on Sept 7 for colluding in fraud.

The arrest followed an investigation into a complaint that the suspect and his accomplices had swindled a gold shop in Mukdahan province out of gold ornaments, said Pol Lt Gen Jirabhop Bhuridej, commissioner of the Central Investigation Bureau (CIB).

Investigators said Mr Thana had approached the shop owner about purchasing some gold ornaments and asked for a bank account number so that he could transfer the money. The owner checked with the bank branch and found the money had already been transferred into the account, and the ornaments were handed over.

But after the customers left, the shop found that the money had not been deposited into the bank account, said Pol Lt Gen Jirabhop.

According to the CIB chief, the suspect had deceived the owner, displaying what turned out to be a cheque payment and not a cash deposit. The shop owner filed a complaint with police at Muang district in Mukdahan.

Police began tracking Mr Thana and learned that that he was hiding in the house in Chatuchak district where he was arrested on Friday night.

During questioning, Mr Thana confessed to all charges. He told police that he had spent the money obtained from fraud to finance his gambling habit at a gambling den in a neighbouring country. He admitted he used knowledge gained from his police experience to commit offences and evade arrest. He changed his name and mobile phones to make it harder to locate him.

The CIB chief said Mr Thana would be handed over to Mukdahan police for legal action while investigators continued to hunt for his accomplices.

Mr Thana was a former student in Class 36 at the Royal Police Cadet Academy. While serving in the police force, he had been accused of involvement in the disappearance of Chairat Ruangruang, a steward of Lufthansa airline, on Dec 31, 2007. The missing man has never been found.

Mr Thana was later arrested for selling Mr Chairat’s Mercedes-Benz at a used-car tent. He was also charged with colluding with his police subordinates to falsify Mr Chairat’s signature on bank drafts to obtain money from a bank. He was sentenced to 15 years and six months in jail but released on Aug 15, 2012.

Later, he became involved in more fraud cases, using cheques to purchase gold ornaments from shops. However, the money was not been transferred into the bank accounts of those shops, causing damage worth tens of million baht.

He was arrested and convicted in 2015. But after his release from jail this year, he returned to commit the same offences in Nong Khai and Mukdahan, police say.

Pol Lt Gen Jirabhop said the suspect also swindled a currency exchange on Surawong Road in Bang Rak out of US$22,000 or about 800,000 baht using the same trick he employed on the gold shop owner.