End of emergency decree to be proposed 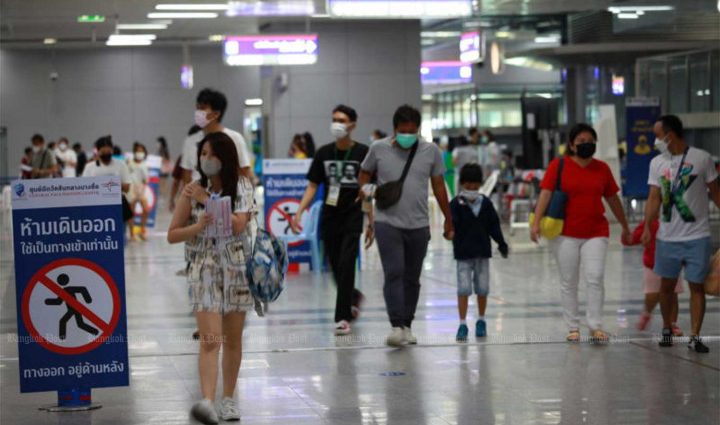 People walk through the Bang Sue Central Vaccination Center in Bangkok. The centre is scheduled to close at the end of this month as the pandemic is winding down, but authorities are encouraging the public to keep ensuring that they are protected against Covid-19. (Photo: Apichart Jinakul)

The Covid-19 operations centre will propose the revocation of the emergency decree from Oct 1 when the Centre for Covid-19 Situation Administration (CCSA) meets on Friday.

Gen Supoj Malaniyom, secretary-general of the National Security Council (NSC) and head of the operations centre, said on Thursday that members agreed there had been a steady improvement in overall conditions. The number of Covid-19 infections has been falling and hospital admissions and deaths have been dropping as well.

Consequently, the operations centre resolved to propose that the state of emergency that has been in place since the early days of the pandemic in 2020 and renewed on a monthly basis ever since, should be revoked.

If Friday’s meeting, chaired Deputy Prime Minister Prawit Wongsuwon, approves the revocation of the decree, the CCSA itself would be dissolved, said Gen Supoj.

Other agencies under the CCSA would also be dissolved and orders issued by the operations centre would be revoked, effective from Oct 1.

The National Communicable Disease Committee (NSDC), which has recently been set up, would handle Covid-19, he said. Thursday’s meeting was the last of the operations centre, he added.

The NSC chief insisted the proposed revocation of the emergency decree had nothing to with Thailand playing host to the Asia Pacific Economic Cooperation (Apec) Summit in November.

The operations centre, he said, based its views on its assessment of the country’s general situation, with the economy recovering and returning to normal and people making a living. Recent tourist figures have improved significantly and that could help offset some of the impact of international conflicts and global economic problems, he said.

Throughout the pandemic, authorities maintained that the state of emergency was needed to more effectively facilitate Covid-19 control, including certain restrictions on international traffic and the prohibition of some activities.

Critics said that existing laws and regulations were sufficient to deal with the disease and the state of emergency was not needed.

Dozens of charges have been laid under the emergency decree but almost all of them relate to political demonstrations, specifically gatherings by people opposed to the government.

However, Thai Lawyers for Human Rights has noted that as those cases move through the legal system, most of the charges are being dropped or those accused of violations acquitted.