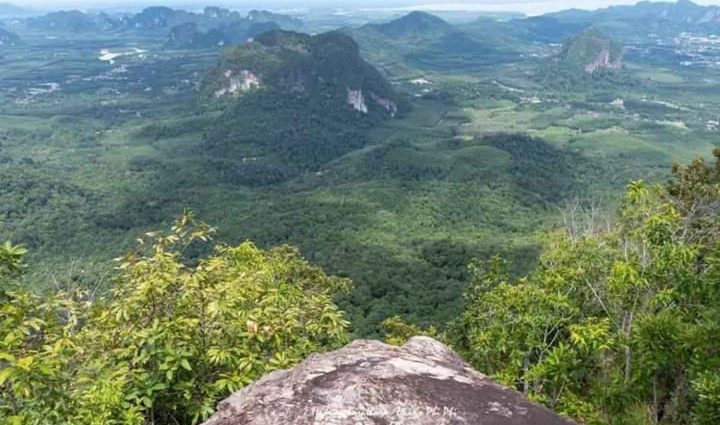 The cliff on Khao Ngon Nak mountain from where a German tourist jumped on Saturday. The trail is in the Hat Noppharat Thara – Mu Ko Phi Phi National Park in Krabi province. The tourist’s fate is not yet known. (Photo: Department of National Parks, Wildlife and Plant Conservation)

KRABI: A German tourist, said to be suffering from depression, jumped from a cliff while being accompanied by park rangers on a nature trail over the Khao Ngon Nak mountain crest in the Hat Noppharat Thara – Mu Ko Phi Phi National Park in this southern coastal province on Saturday afternoon. His fate was still not known.

Teekhawuth Sriburin, chief of the national park, said the tourist leapt abruptly, leaving staff in a state of shock.

Mr Teekhawuth said on Saturday afternoon he received a telephone call from a German man who told him that his son, a tourist called Loo, had been in the Khao Ngon Nak mountain area. The caller said he was afraid Loo, who was suffering from depressive disorder, would take his own life and asked park officials to look for him.

Park officers at the Thap Khaek forest protection unit checked the log book and found that Loo started hiking at 11.12am. They asked the caller to send them a photo of Loo for use in a search.

At around search, park rangers found Loo at about 5.30pm. They asked Loo to come down to their office with them and Loo agreed.

At about 6.30pm, after a 2km descent from the spot he was found by rangers, Loo received a telephone call. When he ended the call, Loo turned to the rangers, said he was sorry, ran towards the edge of a cliff and jumped off. Park rangers said he moved so suddenly they were unable to stop him, leaving them in a state of shock.

The rangers returned to their office and went to Ao Nang police station to file a complaint. They contacted rescue units in the area to launch a search for Loo.

The fate of the German tourist was still unknown, Mr Teekhawut said.

The 3.7km nature trail on the Khao Ngon Nak mountain, about 500 metres above sea level, is popular among adventure-loving tourists.