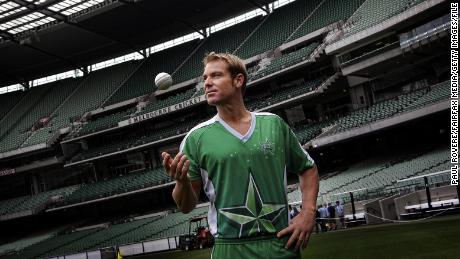 Warne’s sudden death from a suspected heart attack on the Thai island of Koh Samui in March shocked the cricketing world, particularly in Australia where he was regarded as one of the country’s greatest sportsmen.
At a press conference on Wednesday, Australia’s Channel 9 confirmed plans for a two-part miniseries called “Warnie” which will document the spinner’s life.
Channel 9 called it a “fitting tribute to one of the greatest Australians of all time, the Aussie larrikin who lived and loved large” in what it describes as the “must-see drama event of 2023.”
But Brooke Warne, Warne’s eldest daughter, has called the series insensitive.
“Do any of you have any respect for Dad? Or his family?” she wrote on an Instagram story. “Who did so much for Channel Nine and now you want to dramatize his life and our families [sic] life 6 months after he passed away? You are beyond disrespectful.”
In June, Warne’s long-time manager James Erskine criticized plans for the biopic, calling it a “disgrace.”
“He’s only been dead for a couple of months and for them to turn this around and think about doing some sensational thing, well, they should be ashamed of themselves,” Erskine told the Herald Sun.
“I will be writing to Peter Costello because he is their chairman and saying, please explain. Why would Nine even go there? It’s a disgrace and I will certainly be making my voice heard.”
The announcement from Channel 9 comes a day after what would have been Warne’s 53rd birthday. Brooke took to Instagram to mark the day, saying: “Today will always be Your day.”
Channel Nine sent a statement to CNN saying: “Our Warnie mini-series we know will be a celebration of the life of an extraordinary Australian — a man who lived life large and loved passionately. We have enormous respect for Shane and all his achievements, and our hope is all Australians including Warnie’s family will feel the program honours his legacy and life.”
Warne is one of cricket’s greatest players, reinventing the art of leg spin bowling and dominating for Australia for around 15 years.
He had 708 Test wickets to his name — the most for an Australian, and the second-most of all time behind only Muttiah Muralitharan of Sri Lanka.
He was named the Wisden Leading Cricketer in the World on three separate occasions, and one of Wisden’s five cricketers of the 20th century. As a legacy, Warne’s is unrivaled — the sport’s greatest ever leg-spinner.
Perhaps his greatest moment came in the 1993 Ashes series against England when he delivered ‘the ball of the century’ to completely bamboozle Mike Gatting. The video of the delivery was shared extensively on social media as news of his death spread.
In the wake of his death, tens of thousands of fans gathered at the Melbourne Cricket Ground to say goodbye to “Spin King” Warne at a state memorial service for the cricket great.
2022-09-16
Previous Post: Five on Friday: 5 random things about the 50-year-old Merlion
Next Post: Barrier-free car park system extended to Old Airport Road