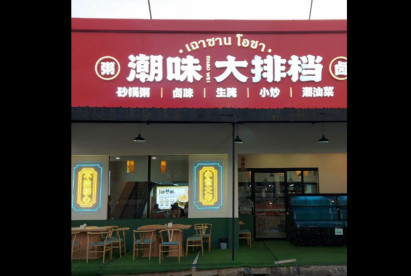 Three Chinese who entered the country as tourists have been arrested for illegally operating a restaurant in Bangkok’s Huai Khwang district.

Immigration police inspected a Chinese restaurant with the Thai name Chaoshan Ocha and English-script  name Chao Wei on Rama IX Road in Bang Kapi area of Huai Khwang early on Tuesday. They found three Chinese men were illegally operating the restaurant and had hired compatriots and other illegal migrants to work there, according to the arresting team

When police arrived, one of the three Chinese men, identified only as Yang, was preparing revenue and expense accounts and the two others – Chin, 38 and Chen, 31 – were cooking in the kitchen. All three were were unable to show their passports, but did show copies to the officers.

The immigration database showed the three men had entered the country as tourists. They were detained on charges of being aliens working without work permits, put on an immigration blacklist and will be deported to their country of origin.

The arrests came after Pol Col Rapheepat Uttasaha, investigation chief at the Immigration Division 1,  received information that Chinese tourists had illegally opened a Chinese restaurant in a Bangkok downtown area.

Earlier, the Department of Business Development warned that Thai citizens who were acting as nominees for Chinese-owned businesses along Yaowarat Road were liable to up to three years in prison and/or fine up to one million baht.

The reminder followed a complaint by a food vendor along the road, known as Bangkok’s Chinatown, that Chinese nationals on tourist visas were using Thai nominees to run businesses in the.area, hurting local operators.