China’s Covid recovery and implications for the Mideast 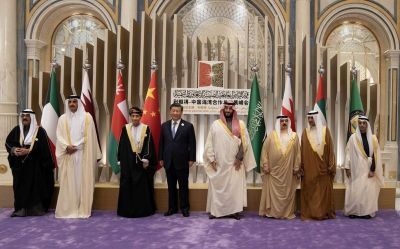 More than a month has passed since China abandoned its zero-Covid policy, reopening its doors after three years of self-imposed isolation. Even as the respiratory ailment sweeps through the country like a tsunami, infecting millions, many inside China believe the worst is behind them.

This positive outlook is reflected in the economic arena. China experienced the slowest GDP growth in four decades last year, around 3%. But as businesses get back on their feet, the government believes external trade will increase significantly, and growth will return.

China’s economic recovery has significant implications for the rest of the world, including the Middle East.

First and foremost, demand from the Chinese market will expand, comforting many observers concerned about a global recession. China’s import of energy resources, including crude oil, natural gas and coal, increased more than 40% last year and accounted for nearly 18% of China’s total imports.

If the Chinese economy is to resume its post-Covid productivity – both for export and domestic consumption – demand for energy products will only grow.

How this demand might be met is a matter of speculation. In 2021, Saudi Arabia was China’s biggest supplier of oil, but in April 2022, that honor went to Russia. (Prior to the war in Ukraine, the two countries alternated in the top spot.)

But China measures costs in more ways than one. Given China’s need to maintain diversity in its crude-oil supply, and President Xi Jinping’s interest in improving relations with the United States, Beijing could become more moderate and cautious in its energy trade with Russia, which would present an opening for suppliers in the Persian Gulf region.

This positive outlook for the energy trade between China and the Middle East is in line with the official commitment from Beijing. On December 9, China announced that it will expand imports of crude oil and natural gas from Arab Gulf countries over the next three to five years.

The pledge was made at the first China-Arab Summit in Saudi Arabia, attended by rulers and officials from Bahrain, Kuwait, Oman, Qatar, the United Arab Emirates, and Saudi itself.

China’s renewed thirst for Middle East oil is about more than navigating an economic recovery. As China tries to achieve its “double carbon” commitment – carbon emissions peaking by 2030 and carbon neutrality by 2060 – it will need oil and gas to offset dirtier fuels like coal. In 2021, 56% of China’s massive energy consumption still came from coal, followed by about 26% from cleaner energy sources.

As Xi’s recent trip to the Gulf demonstrated, China is looking to expand its economic relations with the Middle East, a trajectory that is only expected to accelerate.

Beyond the traditional energy trade, clean-energy cooperation is another key area that China wishes to pursue with countries in the region. One intriguing aspect is civil nuclear cooperation, which Beijing is pursuing with Saudi Arabia and the UAE.

Specifically, China has shown fresh interest in nuclear energy since the beginning of the Ukraine war. Around the world, China is paving the way for an expansion of its third-generation nuclear reactors; Gulf countries are potential buyers.

China is already competing with South Korea to build two nuclear reactors in Saudi Arabia, and other regional projects are reportedly in the works.

While China’s Covid situation since November appears out of control, the chaos is unlikely to last much longer. Beijing is already aiming for a normalization of the country by March, and many expect a trade and economic rebound in the months that follow.

To be sure, a shadow recession in the US has cast a layer of uncertainty about the external demand for Chinese products. But China has other options than the American consumer. Countries in the Association of Southeast Asian Nations and European Union dwarfed the US in terms of trade with China in 2022, so even sluggish demand from the US doesn’t spell disaster for China’s trade volume.

China’s road to Covid recovery is far from over, and many will get ill or even die before normalcy returns. New variants could emerge, complicating reopening plans.

But the zero-Covid reversal has brought a sense of confidence to many Chinese, along with an eagerness to embrace new opportunities. This will translate into enhanced economic and trade activity this year – and a corresponding demand for energy resources from the Middle East.

This article was provided by Syndication Bureau, which holds copyright.