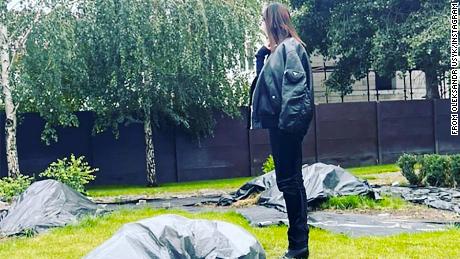 Usyk posted photos of himself in front of the house on his verified Instagram account’s story along with a location tag for Vorzel on Tuesday.
The photos show Usyk, 35, standing near a Ukrainian flag outside the fence of the house.
In April, Ukrainian news outlet ICTV tweeted images from Usyk’s wife Yekaterina’s Instagram story which showed the house being destroyed and burned, along with a caption reading, “Russian world! It came to me too! Beasts! They just ruined everything, they were sh*tting as usual!”
In an interview with British newspaper the Guardian in August, Usyk said that his house had been broken into by Russian soldiers, but that he had “people rebuilding it, so everything is going to be okay.”
Usyk defeated British boxer Anthony Joshua for the second time on August 20 in Saudi Arabia to retain his WBA (Super), IBF, WBO, and IBO heavyweight titles. and returned home to Ukraine on August 29, according to an Instagram post.
When Russia invaded Ukraine on February 24, Usyk traveled to Ukraine and joined the territorial defense battalion.
“If they will want to take my life, or the lives of my close ones, I will have to do it,” Usyk told CNN’s Don Riddell. “But I don’t want that. I don’t want to shoot, I don’t want to kill anybody, but if they will be killing me, I will have no choice.”
In March, the Ukrainian sports minister said Usyk would be granted permission to return to training in the lead up to his fight with Joshua, but still the 35-year-old was reluctant.
“I really didn’t want to leave our country, I didn’t want to leave our city,” Usyk told reporters, according to Reuters. “I went to the hospital where soldiers were wounded and getting rehabilitation from the war.
“They were asking me to go, to fight, to fight for the country, fight for your pride and if you’re going to go there, you’re even going to help more for our country.
“I know a lot of my close people, friends, close friends, are right now in the front line and fighting. What I’m doing right now, I’m just supporting them, and with this fight, I wanted to bring them some kind of joy in between what they do.”
Combined with a parallel offensive in the south, Ukraine has taken back a total of 6,000 square kilometers (about 2,300 square miles) of land in in the northeast, President Volodymyr Zelensky said Monday.
The Ukrainians have gained a huge weaponry haul from these battles in the northeast, as many Russian troops sacrificed their vehicles intact in order to escape with their lives.
2022-09-14
Previous Post: Man jailed for pointing knife at colleague he was infatuated with, demanding intimate acts
Next Post: ‘Humour over rumour’: Taiwan eyes Ukraine messaging model if China attacks