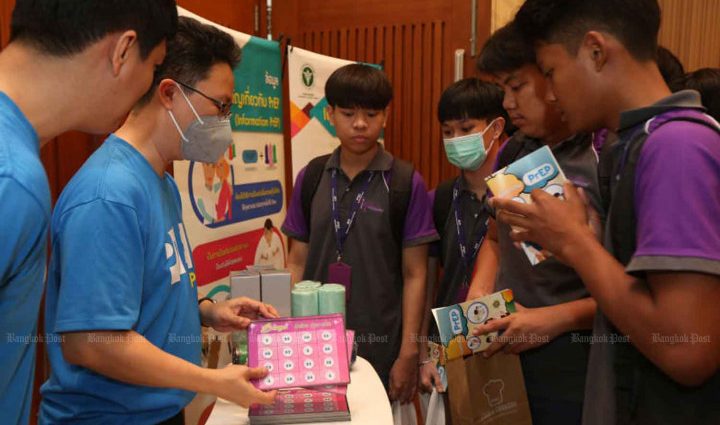 Condoms are given away at Pongsawadi Technological College in Nonthaburi province on the eve of Valentine’s Day in 2020 in a campaign to encourage youngsters to cut down on drinking and avoid unsafe sex. (Photo: Varuth Hirunyatheb)

Dr Chadet said the condoms – along with lubricating gel – will be distributed via the Paotang application starting from Feb 1.

He said the NHSO regards condoms as an effective tool against unwanted pregnancy and sexually transmitted diseases such as syphilis, ovarian cancer from human papillomavirus (HPV), gonorrhea, chlamydia and Aids.

For the year 2023, the NHSO has initially prepared 94,566,600 condoms, together with lubricating gel, for holder of the 30-baht universal card, also known as the gold card holders, of reproductive age. The condoms will be available in four sizes – 49, 52, 54 and 56 millimetres.

Starting Feb 1, users of the universal card, also known as the gold card, are entitled to 10 condoms per week.

They can register on the Paotang smartphone application to receive the condoms at designated drugstores, community clinics and state-run health offices.

Those without a smartphone can use a Thai national ID card to register for the condoms at designated service outlets.

The NHSO is also cooperatingb with the private and public sectors to erect automatic dispensing machines at various locations to facilitate condom delivery for gold card holders who do not find it comfortable to go to the designated service outlets.

“At the primary stage, automatic condom dispensing machines will be installed at three spots in Pattaya, Chon Buri, for service from Feb 14, Valentine’s Day. More will be installed in other parts of the country afterwards,” Dr Chadet said.