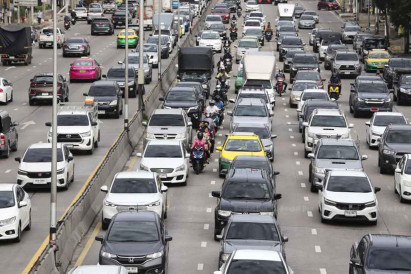 About 600,000 cars nationwide have still not been checked for defective Takata airbags, says the Department of Land Transport (DLT), which is urging drivers to get replacements free of charge.

A system has been in place for several years to remedy the problem, ever since reports began to emerge about problems with the Japanese company’s airbags in vehicles worldwide, according to Jirut Wisanjit, director-general of the department.

Defects in Takata brand airbags, produced and fitted in cars between 1998 and 2018, have been linked to accidents and fatalities, leading to the largest automotive product recall in history spanning numerous countries.

The DLT since 2018 has been working with the Thai Automative Industry Association (TAIA) and car dealers to notify owners of cars in which Takata brand airbags might have been installed. Owners have been encouraged to get their vehicles checked and have the substandard airbags replaced.

So far about a million cars have had unsafe airbags replaced. But there are still about 600,000 that have not been checked, the department said.

As a result, the DLT this week has introduced a new system to warn car owners about the substandard airbags.

When owners go to department offices throughout the country to renew their licences or pay the annual car tax online via DLT E-Service, officials will check whether their cars are fitted with the suspect airbags.

Officials will then ask for owners’ names and telephone numbers, so that they can be contacted later and told how to get the unsafe airbags replaced free of charge at a service centre near their homes. Owners can obtain more information on the service from the TAIA at its dedicated website www.checkairbag.com.

2023-01-24
Previous Post: Russia’s war: what a difference a year makes
Next Post: Electric vehicles now mainstream, but no silver bullet