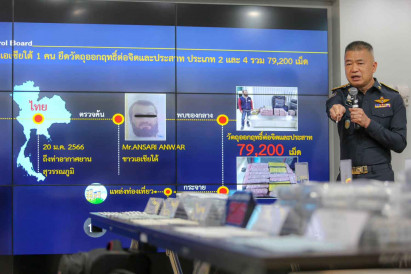 Wichai Chaimongkol, secretary-general of the Office of the Narcotics Control Board, briefs reportersat the ONCB headquarters on Monday on the arrest of a passenger from South Asia at Suvarnabhumi airport with a large quantity of drugs. (Photo: ONCB)

A 57-year-old man was arrested on arrival at Suvanabhumi airport from Pakistan with 79,200 tablets of anti-anxiety and stimulant medication in his luggage, Office of the Narcotics Control Board (ONCB) secretary-general Wichai Chaimongkol said on Monday.

Ansiri Anwar, 57, described only as being from South Asia, arrived at Suvarnabhumi airport from Karachi on Friday, Mr Wichai said.

The first four were classified as Category 2  drugs and the fifth as Category 4 – all of them affect the central nervous system.

Mr Wichai said South Asia had become a major regional source of chemicals and drugs. Transnational criminals from South Asia had been active in Thailand, involved in illegal activities including producing and trading of fake passports, forgery of documents, human smuggling and the trade in drugs.

ONCB statistics showed that between 2018-2022 nine suspects from South Asia were arrested in eight cases – with 31.22 kilogrammes of ketamine, 2.4kg of cocaine, 1.1kg heroin, 6.5 grammes of ice or crystal methamphetamine and 8 meth pills seized.

People found to be involved in illegal production, import, export and sale of or having in possession Category 2 narcotic drugs are liable to one to 15 years in jail and/or fine of 100,000 – 1,500,000 baht. Those found with Category 4 drug stimulants are liable to a jail term of up to five years and/or maximum  fine of 500,000 baht.